Find a meat-eater near you. Right now. Ask them to count on their fingers the number of different animals they actually eat. Do they run out?

Every now and then you’re presented with a fact that really surprises you, really shifts your perspective. Joining in on an Entocall the other day (an online conference to discuss edible insects), I was taken aback by psychology professor Paul Rozin’s point that the animals we actually consider ‘edible’ are a tiny fraction of what’s out there.

You might consider this a good thing, especially if you’re vegetarian, but it raises the interesting point: why do we label anything other than chicken breast and beef steak as ‘disgusting’?

I’m exaggerating slightly. Many people eat fish, game, lamb. But there are an estimated 5,000 mammal species in the world, and people in the west – particularly in the United States – only really eat three of them. Our delicate palettes extend to a tiny number of domesticated, engineered, fattened mammal species – cows, pigs – which we rear in huge numbers, often in cruel and revolting conditions. 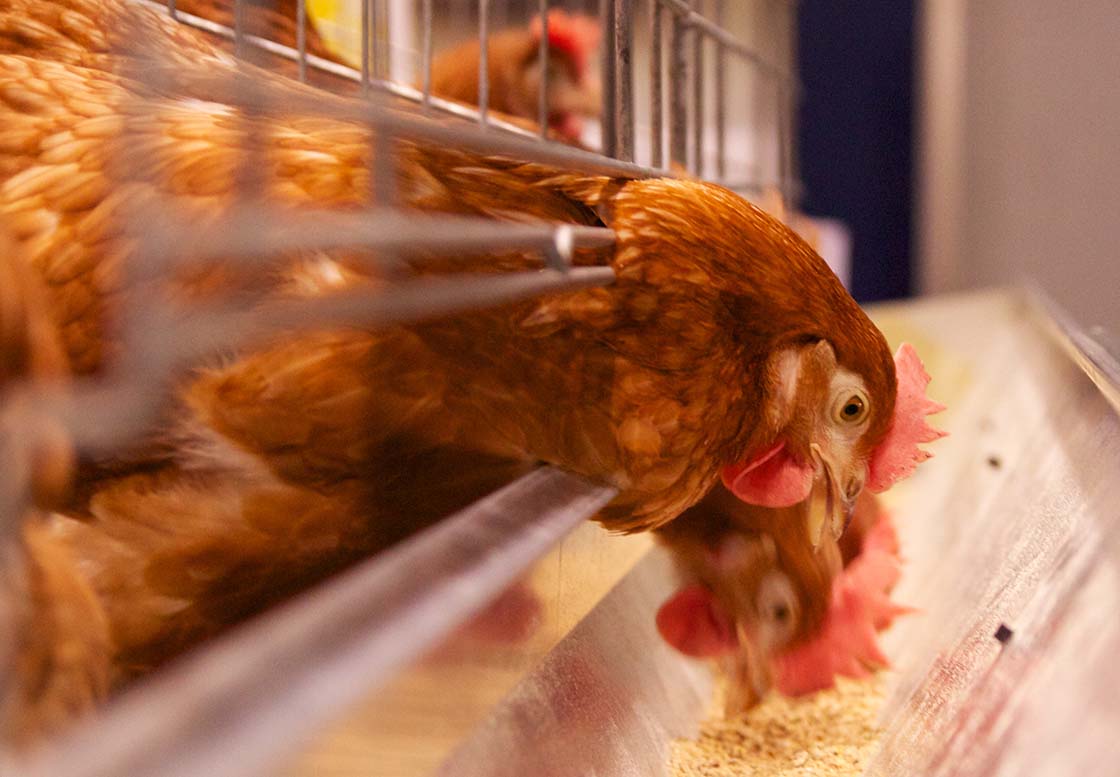 Similarly with birds – chickens and turkeys. Hormone-boosted and dosed with chemicals, bred to become obscenely fat as quickly as possible. It puzzles me that these meat products are not widely recognised as ‘disgusting’, when it seems not only morally repugnant but deeply concerning in terms of health effects.

And only the muscle are generally eaten. We no longer touch the internal organs, brain, feet or skin. We seem to like our meat unrecognisable: a lump of flesh in a sealed packet, divorced from its origin.

Paul Rozin’s point was that the circle we’ve drawn around what we consider edible is extremely small. “Rats, bats, horse? ‘Yuck!’ We eat no reptiles, no amphibians. Only two birds… So there’s nothing special about insects. Almost all animal products are ‘disgusting’, Rozin explained during the call.

“Vegetables aren’t disgusting in this way. They don’t have the same property of contamination: if you think of a vegetable you don’t like – say, carrots – you could still drink a glass of milk after dipping the carrot in. Not so with a meat product you don’t like.”

Rozin teaches at the University of Pennsylvania. He is interested in the psychology of disgust; how cultural judgements on morality are translated into widespread disgust. In a 1997 interview he gave the example of smoking and obesity – things that had become associated with revulsion and bad taste in a way they never were before, due to shifting cultural priorities.

“Every culture eats something that other cultures find disgusting. Like cheese – it’s rotted milk. In some cultures, that’s disgusting.”

Before sushi became popular in the west it was seen as something weird, perhaps even dangerous, and definitely disgusting. The words ‘raw fish’ still turn people off. But now it’s a delicacy. This was a ‘top-down’ trend, notes Rozin – an unusual delicacy brought by businessmen and consumed by the elite. And partly due to the fresh ingredients required, it widely remains so. 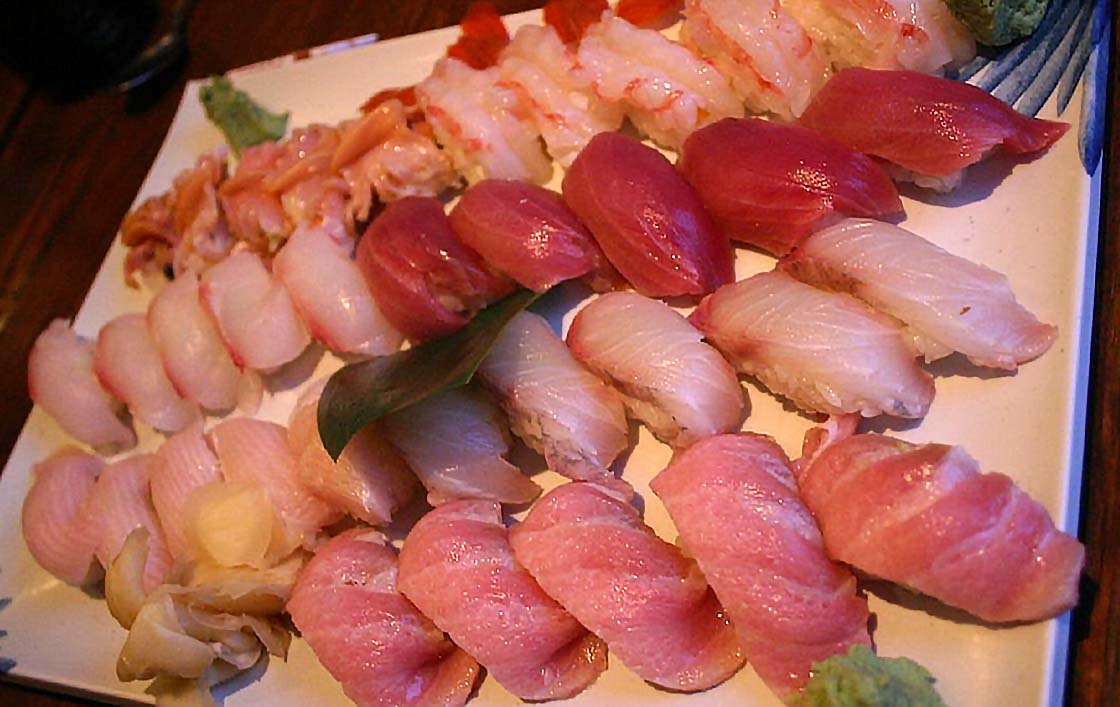 I grew up on Fair Isle, a wee dot on the map between Shetland and Orkney, far off in the North Sea. On a small island fresh fish is of course an everyday thing – but you wouldn’t have eaten it raw. It just wasn’t done. Overcoming that barrier was difficult for me – though again, as Rozin said, once you’ve eaten something a couple of times, the disgust factor really evaporates quickly.

But sushi isn’t a great example for enthusiastic entomophagists to look to, Rozin argued. It’s not an accessible foodstuff; it’s not solving any problems of malnutrition or poor diet. Its ‘disgusting’ element was overcome through society’s desire to emulate the rich and what they consume.

In contrast, ‘bottom-up’ food is often introduced to a culture via immigrant populations, and sometimes remain cheap and available to all. For Rozin, this is key to the spread of edible insects – he doesn’t want to see them become the next sushi.

Sushi is not a great example for edible insects

Often in society the food traditionally eaten by poorer people became ‘disgusting’ through its association with shame and poverty, making it ‘disgusting’ – an example of cultural judgements translating into disgust.

Some such foods are now enjoying a trendy resurgence though. ‘Offal’ is a general term for an animal’s organs, once eaten widely in the UK. It is now making the lifestyle pages of The Guardian and featuring in top chef’s dishes. For many people, still, the word alone is enough to produce a strong expression of disgust. Will its renewed popularity ‘filter down’?

Being Scottish, I naturally have to bring haggis up here. This national dish is made from the heart, liver and lungs of a sheep, and sometimes the stomach lining. It’s supposed to be made spicy with pepper – allegedly to cover the taste of rot when the meat was ageing. Now it can be found in top restaurants, a ‘delicacy’, though notably still banned in the United States! For some people, the minced-up form of the offal and the world-famous name is enough to get them over any aversion to the contents, but others refuse it point-blank. Offal is, for many, not edible. 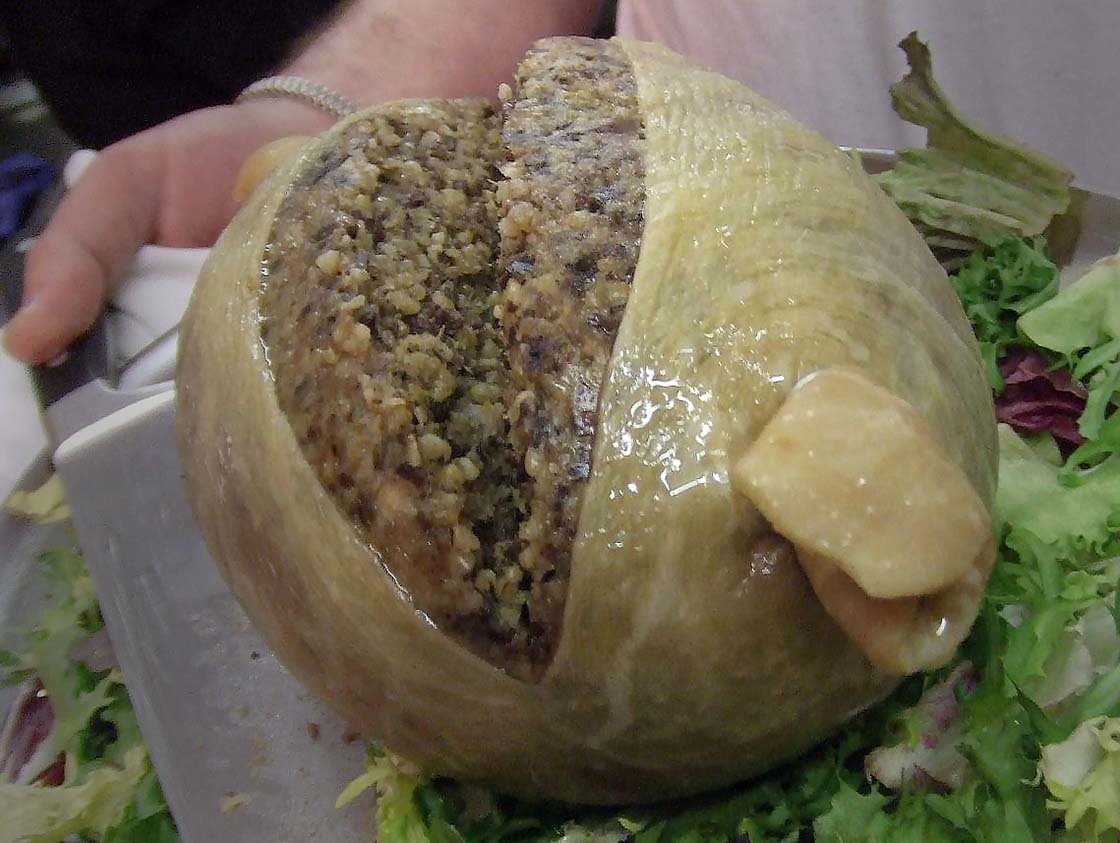 I didn’t realise for many years that my favourite food in the world – a Shetland dish called ‘reestit mutton’ – got its unique and tangy flavour from being ‘a wee bit off’. It’s not as extreme as the Icelandic and Faroese versions – seriously fermented and an ‘acquired taste’ – but the unmistakeable salt-mutton taste of the Shetland meat comes from its months spent hanging up to dry indoors after being steeped in salt water. Describe it as ‘slightly rotten’ mutton and you might not get many takers. But call it a Northern Isles delicacy and people can’t get enough. Disgust would indeed seem to be significantly about culture, rather than taste.

So insects aren’t alone in being considered disgusting. And much of our disgust is not based on some rational, subconscious risk-assessment – but cultural notions of what is and isn’t food, which become ingrained and deeply-rooted. The big question could be: which will win out in the US first – haggis or mealworms?

Then again, why not solve the question by combining the two. We’re pretty sure that no one in the US has made mealworm haggis yet. Here's how to make Buggis.