"It got really weird at one point", Jakub Dzamba admits. "When I was sort of... herding them."

Dzamba, a Canadian researcher, is describing the point at which he realised the crickets in his experimental farm had personalities. Observing his bugs intensely and making notes on their preferences, the cricket farmer and PhD student noticed that some preferred their own space, while others would follow the herd. He figured out how to encourage the crickets to move somewhere, rather than manually picking them up to transfer. The realisation translates into significantly lower labour costs when farming on a big scale.

It's these ingenious tweaks and ideas that give Dzamba's Cricket Reactor impressive results. While standard cricket farms (yes, there are a growing number in this booming industry) have a typical monthly yield of 1 pound of edible cricket per square foot, Dzamba says his model can produce 5 pounds. The initial countertop prototype has been developed into a much larger version, which can come pre-fabricated in a cargo container, or be modified to fit into whatever space you have free. 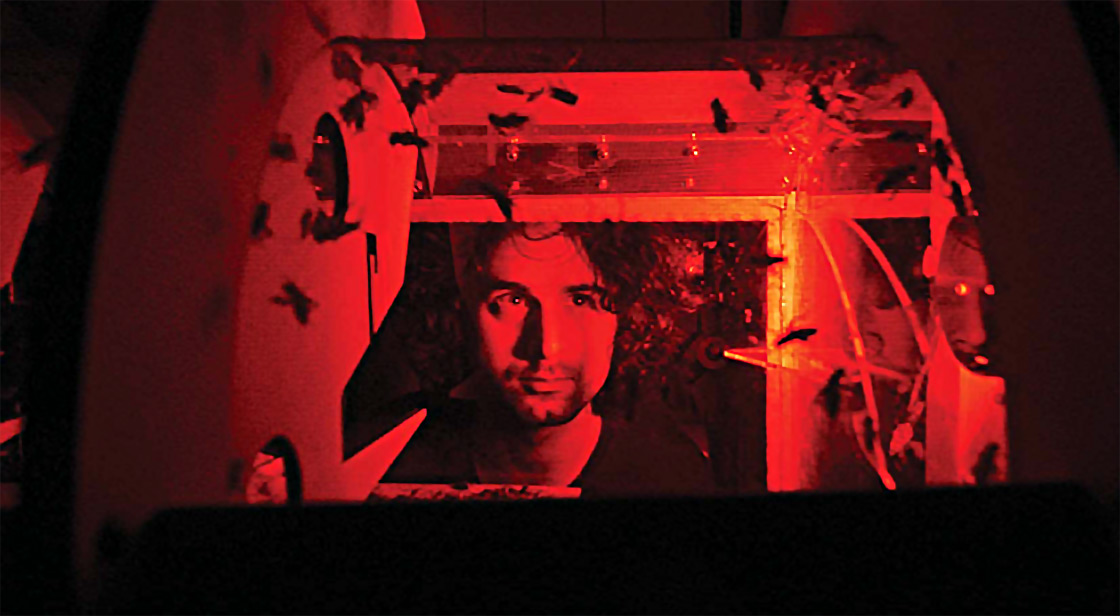 And it's not just about yield – his model is resourceful, utilising urban bio-waste for the crickets' food; it's even somewhat utopian. Dzamba did not stop at a consumer-friendly countertop farm, but has imagined whole urban landscapes that have the mass production of edible insects built in to their fabric, with heat, warmth, waste and sustainability all addressed. As is often the case with new design and architecture, it's feels simultaneously like far-fetched science fiction, and something that's just around the corner.

But it's been a long slog for Dzamba, who started working on the topic around eight years ago. Among westerners, the idea of eating bugs has only begun to take off in the last few years (elsewhere in the world, of course, it's been the norm for millennia). So when Dzamba started his work, not only did his project attract little commercial interest, but people were actively hostile to his bug-breeding plans.

Things have changed rapidly since then. "There's this flood of entrepreneurial stuff", Dzamba enthuses, "and now people are coming on board. Engineers, architects – creating stuff rather than looking at it as a business concept. I can collaborate much more with people now."

Echoing the thoughts, no doubt, of other 'ahead of the curve' entomophagy enthusiasts, Dzamba says it is "really reassuring that I'm not a total nutjob". His research was so 'out there' that it nearly cost him his masters degree at the University of Toronto. But he continued undeterred.

It all started, Dzamba says, when trying to solve an increasingly common problem: How to farm a lot of food on a very small piece of land. "A house-sized plot", he explains, "and at first I tried a vineyard. It produced seven bottles a year and sustained a few chickens."

Some might be pleased with their new-found viticultural success, but Dzamba has a touch of impatience about him. "I started thinking of this biowaste idea. Urban waste – sewage, grey water – with this you can make algae, fungi. With these, you can feed insects. And with insects, you feed people." 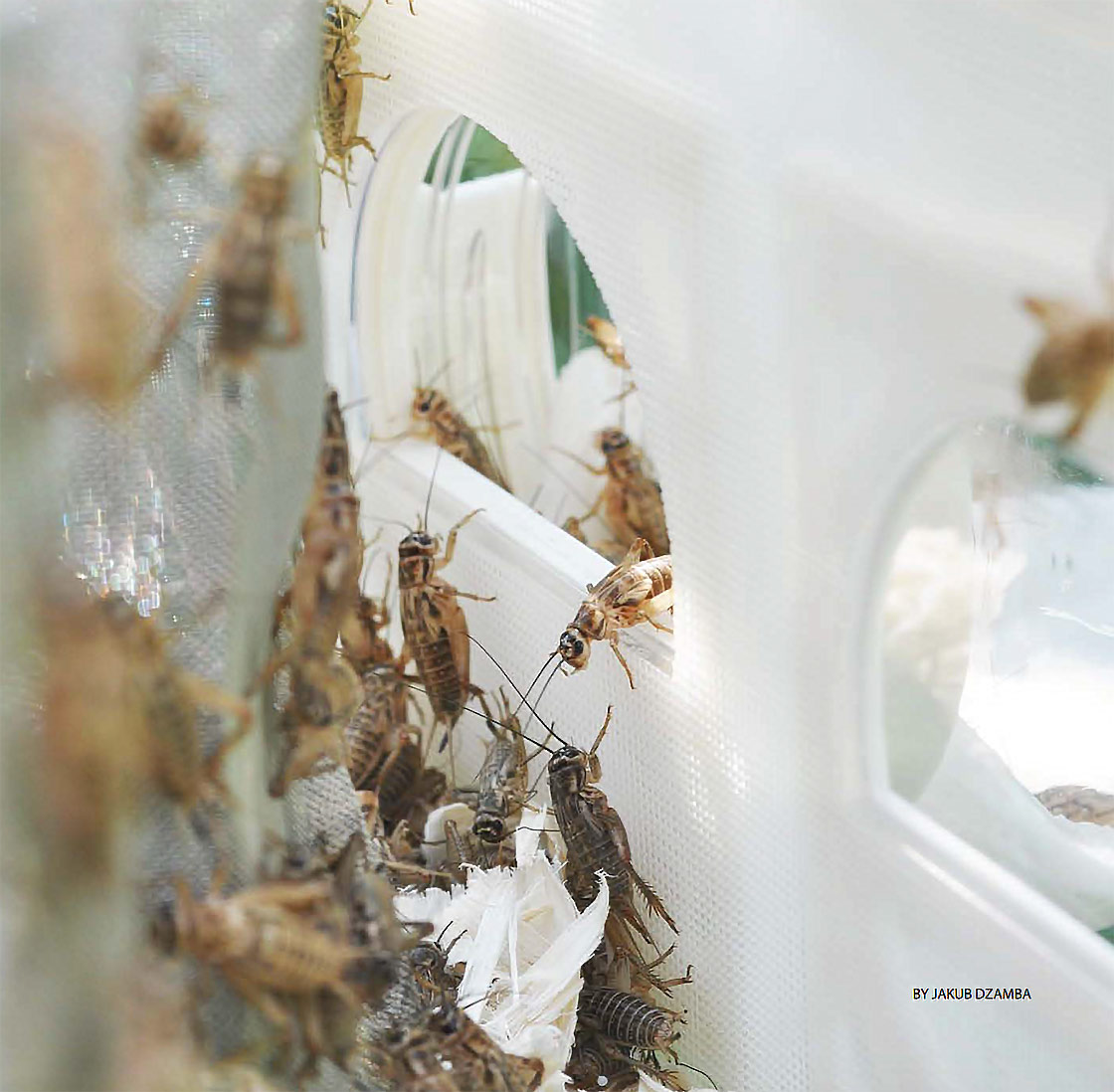 Dzamba immediately saw the bigger significance of this. "What appealed to me was the calculation: that you could feed hundreds of people on that one small piece of land."

It's all about density, a concept popular in architecture currently, and popular with those trying to solve the global problem of land shortage and urban sprawl. Meat production is one of the biggest land uses, but it's stunningly inefficient compared to cricket production, partly due to insects' cold-blooded state, partly because we eat so little of the actual cow.

A practical extension of the long-popular 'garden city' idea, urban agriculture is at the heart of Dzamba's model: slotting a pre-fabricated cricket-farm into the back of a building, the space without natural light which is usually neglected. The constant supply of waste from the building (grey water, used air, biowaste), is reclaimed as feed for the crickets, which are housed in their automated, high-tech home. More sci-fi-esque ideas involving biomass and solar hybrid concentrators are explained in Dzamba's presentation, but the basic idea is of a living, breathing building that contributes positively to food production and ecology.

This '3MF revolution' (it stands for Third Millennium Farms) is introduced by Dzamba with a futuristic scenario: clicking through mock-ups of glowing green tower blocks and slick urban landscapes, he sets the scene. "I'm the director of urban farming in Moscow, where we've just begun to experience our first food shortages. I've come to Toronto to see how 3MF works in another cold-climate city."

Dzamba's presentation in '3 Minutes to Change the World'

It sounds just as 'out there' as cricket-eating does to many more people. But dire warnings of food shortages in the not-so-distant future are becoming common - along with predictions of antibacterial resistance due to intensive livestock farming, and looming environmental catastrophe. Dzamba's ideas are timely, and he says he's receiving a lot more interest than he did just a few years ago.

There's also something pleasing in the closing-the-circle model of insect production Dzamba describes. "We spend lots of money on importing food to the city, and lots of money on getting rid of waste from the city", he says. "So this idea is about tightening that relationship".

Dzamba's ideas disrupt the 'industrial vs. small-scale' dichotomy when thinking about future agriculture. He concedes that the "big industrial-scale stuff will always have a place. Perhaps that will be the majority of production."

But urban agriculture, in the way Dzamba sees it, is something different. It's a far cry from the handcrafted, organic, back-to-nature ideals, but also bears little resemblance to large-scale, corporate methods. Dzamba is keenly aware of the space the crickets need to move about; of using cold temperatures to euthanize them rather than CO2.

Trailer for Kubo's Crickets, a short film about Dzamba

Edible insects, it seems, have made 'out there' ideas into real possibilities. Now Dzamba's Third Millennium Farms are developing a kit-farm; a 300sq ft hive (just under 30 square metres) that anyone can operate and which he says will produce around 1,200lb (550kg) of food per month. It's an idea popular with other insect-entrepreneurs; Aspire in Ghana offers starter kits for local farmers to grow palm weevil in tubs, hoping that domestic production will make the bugs affordable.

A drastic drop in price, Dzamba agrees, is vital – and he thinks his model of biowaste would contribute to this, as companies pay good money to have their waste removed.

Whatever the future holds, Jakub Dzamba is certain that this high-tech urban agriculture "is going to surprise everyone."