Live near a rotting palm? Pop goes the weevil!

One delicacy you’ll find in many tropical countries is the palm weevil. These are large beetles, with hard shiny shells. Most types are black but the one found across the Asian continent is dark red with black markings. Though not as impressively war-like as the stag beetle, they’re pretty tough-looking creatures.

Before the weevils look like this though, they spend months as larvae and then pupae - like large, fat white worms, they’re what might be called ‘grubs’.

Palm-munching pest of the tropics?

Gardeners in these warm but ‘western’ climes go to great lengths to kill off the weevil worms – but elsewhere people go to equally great lengths to eat them. The spreading of palm weevils to southern Europe and the US is great news – not for palms of course, but for those who want to eat the larvae. Silver lining to every cloud!

There are officially four types of edible palm weevil, found on almost every continent. Their larvae, and to a lesser extent the adult beetles, are deliberately farmed and harvested all over the world; more recently in a more industrial manner in Thailand, but for many centuries by native peoples using tree felling techniques.

This enterprising US blogger suggests the larvae are easy to raise yourself, on a diet of "canned pineapple, oats, sucrose, molasses, brewer’s yeast, Wesson’s salt, and vitamins." He also suggests you don’t shout too loud about your domesticated herds of larvae around government employees – for more on the legality of edible insects, see here. 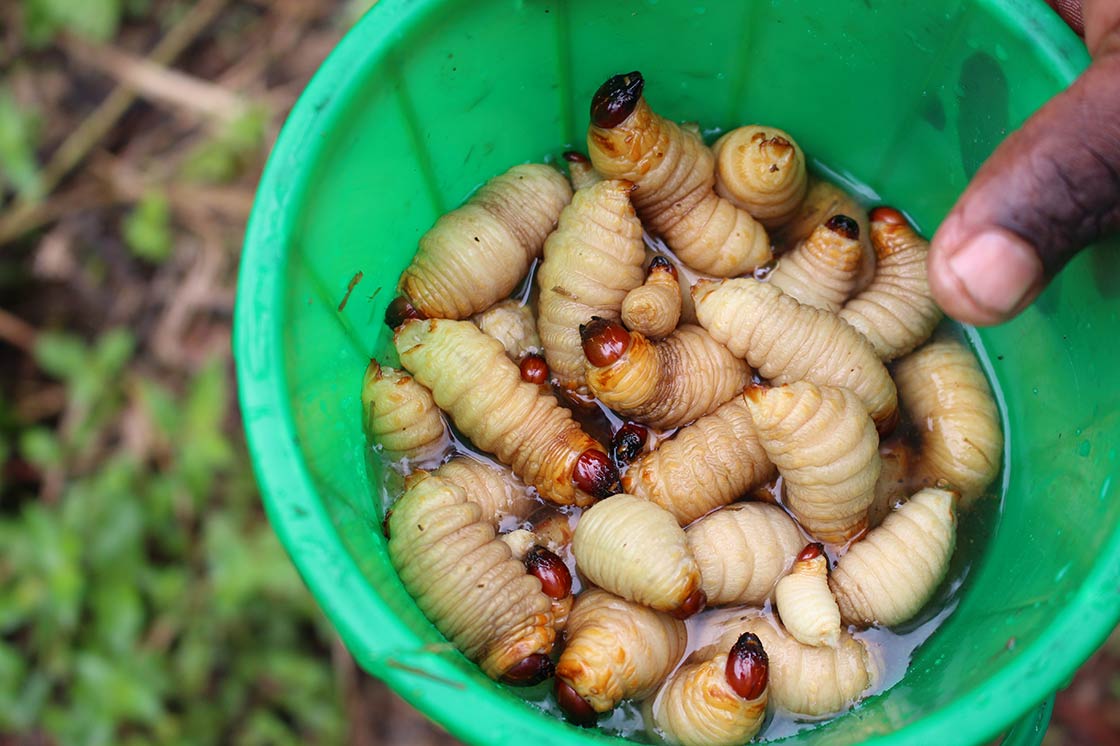 Palm weevils can indeed be raised in large numbers fairly easily using old tree trunks and plastic tubs, and this booming Thai industry has been attracting much interest. A Canadian research team went to Thailand in 2013 to consider whether the mass production of weevil larvae for food could be successfully transferred to African countries where they are eaten, but not farmed.

What excited the researchers looking at Thailand’s palm weevil industry was the potential of this farming technique to feed people in areas where hunger is a constant problem. Palm weevil larvae often get special mention for their incredibly high nutritional content. They’re packed with protein and healthy fats, as well as twice the average zinc content of beef. Now some of those researchers went on to form Aspire, a company farming crickets in the US and palm weevils in Ghana.

Weevil larvae can be eaten fried, boiled, roasted or even raw. As they’re 10-30% fat, they don’t need oil to cook and will caramelise in their own juices, becoming golden-brown and crisp. To avoid exploding larvae, it’s advised that you slice them open a bit before cooking. Just like piercing the film in the microwave. Sort of.

More on Bug of the Week Beetles

More on Bug of the Week Thailand