Across the south of the African continent, in shallow limey soils and hot dry air, you’ll find the mopane tree. It has delicate leaves, shaped like butterfly wings, and hard, dark-red wood. And on this mopane tree you might well find an extraordinary-looking caterpillar.

The 'mopane worm' – really a caterpillar, as it later turns into a moth – looks brilliantly prehistoric, with gnarly black spikes running the length of its large body, furry little feet, and a funky neon-yellow-and-orange pattern.

Then it’s off underground for metamorphosis, and the caterpillar becomes an emperor moth – rather plain in comparison to its caterpillar, and only living a meagre 4 to 5 days. 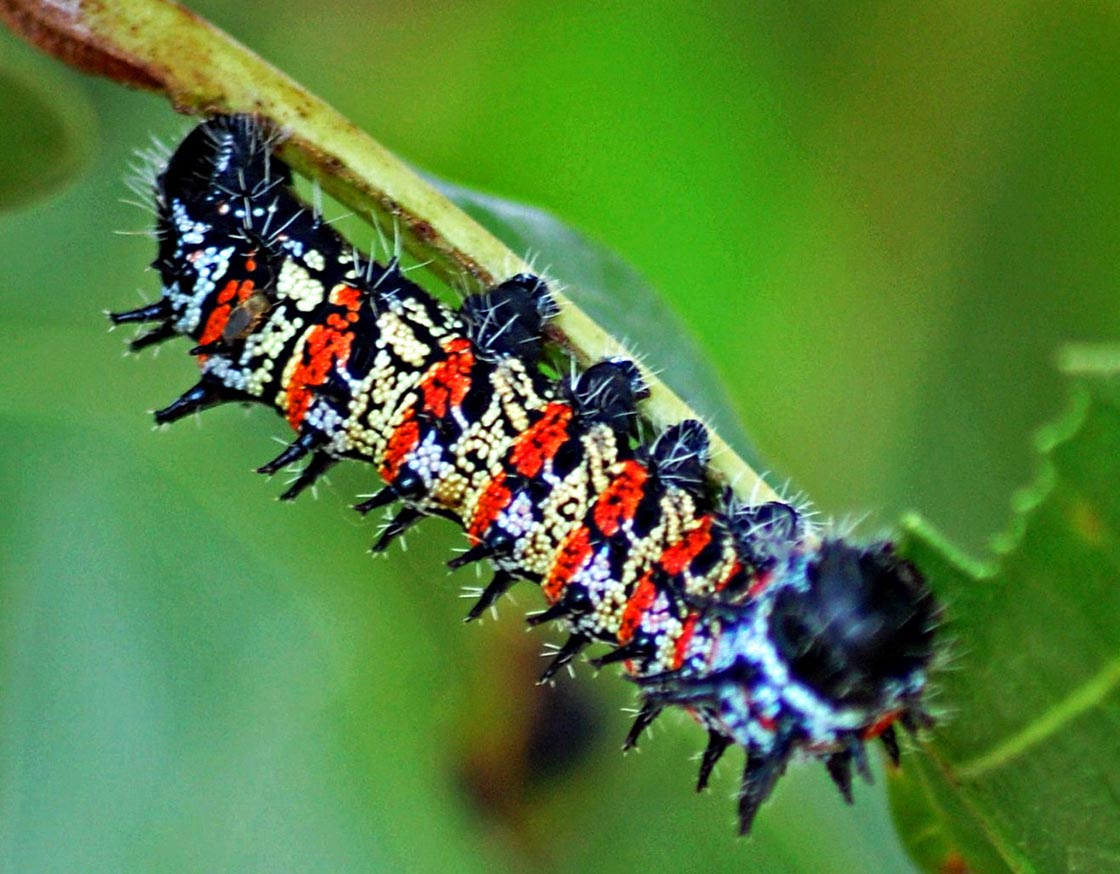 Much like Eric Carle’s famous children’s character, this is a very hungry caterpillar. It feeds voraciously on the mopane’s leaves and is also partial to mango leaves, becoming fabulously fat and protein-rich as it goes.

But as these brightly-coloured bugs are a staple food source for many people in southern Africa, especially Zimbabwe, Namibia and Botswana, they are often harvested before making it to metamorphosis. A mopane caterpillar contains 48 to 61 per cent protein. That’s a higher percentage, on average, than steak, and double what you’d find in beef mince. 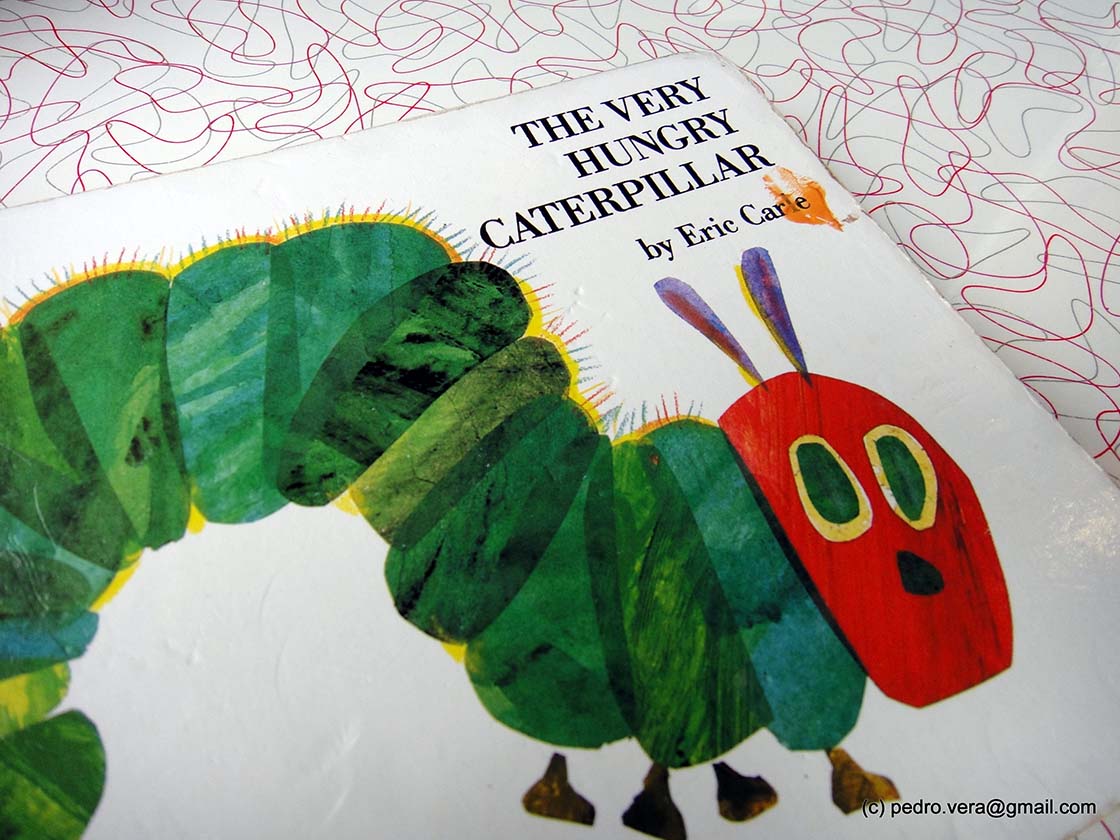 Iron, potassium, calcium, zinc and magnesium are also found in high concentrations in this bug. Iron deficiency is the most common nutrient deficiency in the world, with rates as high as 40 to 60 per cent among young children in sub-Saharan Africa. Naturally-occurring staples like mopane worms are therefore really important, especially for children’s health.

This travel blog notes that the worms are called phane in Botswana, mashonja in Zimbabwe and parts of South Africa, and omangungu in Namibia.

So how are they harvested? This news report illustrates the process: shaking the caterpillars loose from the tree, squeezing out the bright green guts, and taking the harvest home to dry in the sun. The caterpillars are ready to eat as a snack once they’re dried, and are sold at markets like this. You can also get them canned in some places. 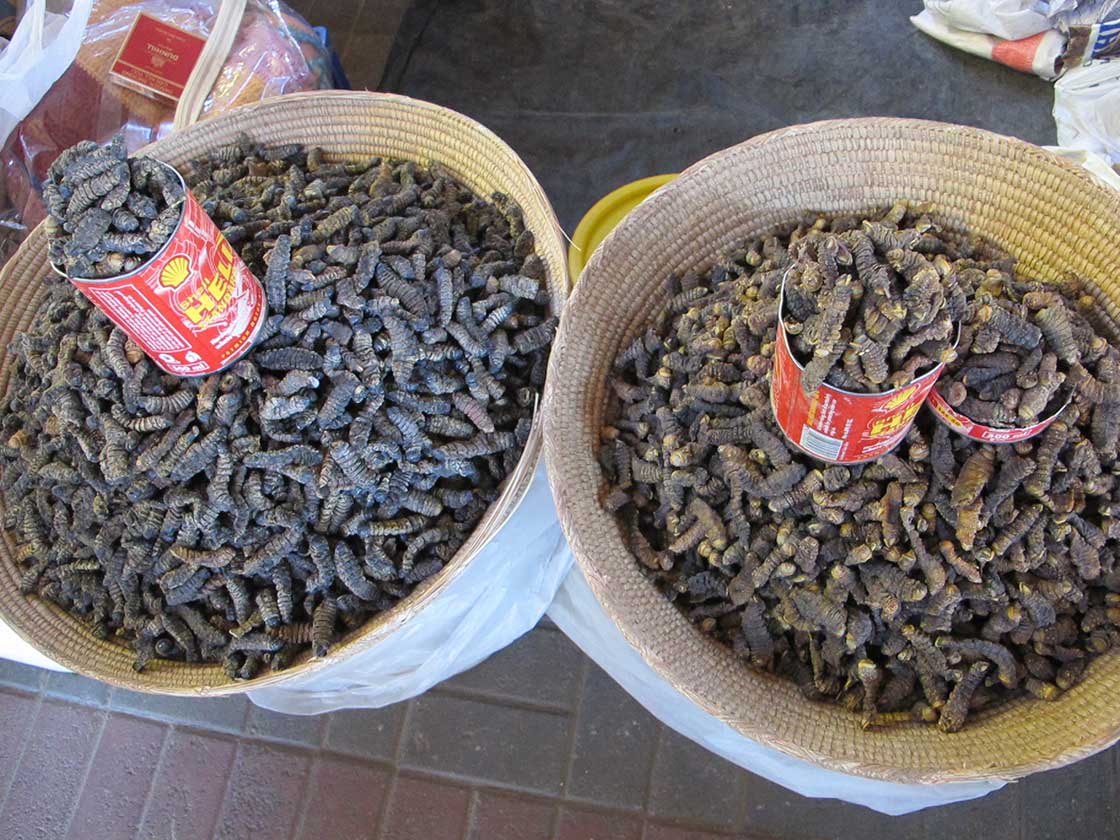 Because the dried worms keep for months without refrigeration, they’re an excellent source of emergency protein.

Dried caterpillars must be soaked in water for anything up to four hours before they’re ready to cook with, depending on how juicy you might like them. Then they can be fried until crispy, or put into a stew. If you travel around rural southern Africa, you’re likely to come across mopane worms, either canned or at a market. We’ve found the taste described as “burned steak”, “crunchy and salty” (as anything will taste if you fry it, surely) and, of course, “butter and peanuts”. But many accounts of eating mopane caterpillars are written by westerners, treating mopane worms as a sort of freakish adventure food, rather than a normal, everyday staple.