Greater Wax Moths, or Galleria mellonella, are hardy moths whose larvae ('waxworms') eat beeswax and honey, resulting in a lightly sweet but mostly bland flavor, perfect for absorbing other flavors while cooking.

Having traveled with their honeybee hosts, they are found practically all over the world.  Scientists theorize that exposure to a wide variety of predators during these travels may explain why wax moths have developed the world’s most extreme hearing. They recognize frequencies up to 300 kHz, while bat sounds are only believed to reach 212 kHz and humans can only hear 20 kHz at best.

Famed bug chef David George Gordon called them “the best-tasting of the bugs” and compares their dry-roasted flavor to pistachio.

There’s no unsettling crunch to a waxworm taco

They’re also one of the easiest insects to cook well. When gently sauteed over a low flame, the skin becomes translucent just as they reach the texture of perfectly steamed shrimp. This makes for a familiar experience I often recommend for first time insect-eaters. There’s no unsettling crunch to a waxworm taco, so they’re ideal for people unaccustomed to eating insects.

You can buy waxworms online or at most pet stores as they are common reptile feeders. Unfortunately, they will be packed in tiny wood chips and a few will always be dead and must be removed (like the black one in the picture). Unlike the smooth exoskeletons of beetle larvae, waxworms have soft skin that clings to these wood particles. Rolling them on a cotton cloth is the easiest method I’ve found to remove the wood.

Avoiding this time-consuming process is my favorite perk from growing them myself, and I hope that some brave company will offer food-grade waxworms packed in anything else soon. At least this gives you an opportunity to sort out any dark, splotchy ones. Those aren’t healthy and won’t taste as great as the rest will.

For ideal flavor, it's best to separate the waxworms while they are alive. Don’t worry, the rest is easy. Personally, I like to feed them their natural diet of beeswax and honey (see pictures for waxworm chow) for a few days before cooking them. 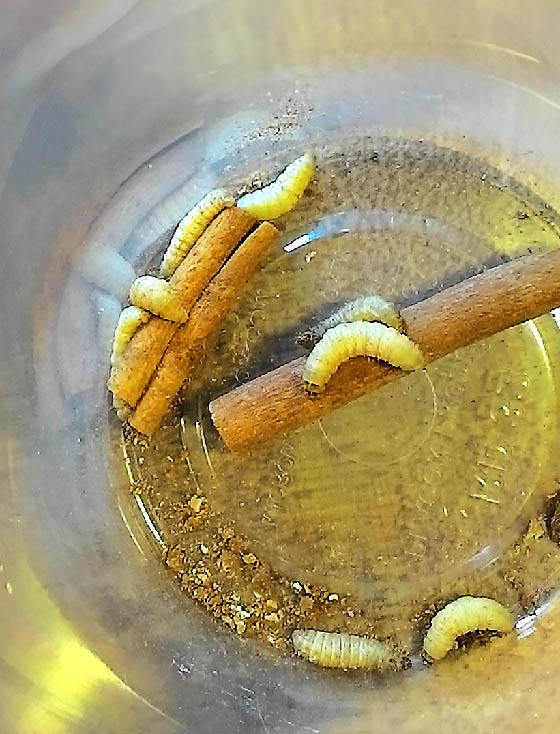 Cinnamon sticks made good feeders so they don't get stuck in the honey and drown. This or leaving them in an empty bowl for a day will make sure any wood or other material they may have ingested has left their systems (like de-veining shrimp).

Freezing will then kill them in a process scientists believe to be painless. I’ve never seen them reanimate after brief freezing as mealworms, superworms and crickets can, but I’d still recommend leaving them frozen for several hours. (I tested mine after two hours and they didn’t come back to life.) 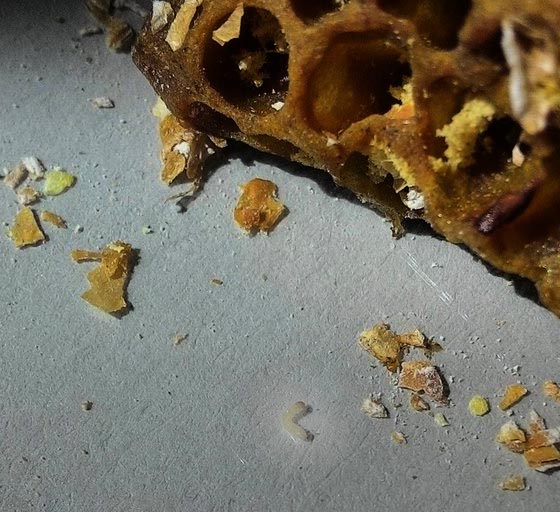 If you end up loving them as much as I do, you can also raise them at home for a constant supply.  It’s not quite as effortless as raising mealworms, but it’s perfectly doable and information is readily available online. Watching the moths emerge from their pupae can be rewarding enough on its own and, like tomatoes right off the vine, your home-grown waxworms will definitely be the best you’ve ever tasted.

In the picture, a newly hatched waxworm explores the world outside the waxcomb. Can you spot it?

‘As difficult as herding cats’, the saying goes – well, try herding grasshoppers. Not only can these guys jump the bug-equivalent of several football fields, but they can actually fly too. Nevertheless, the idea of farming them like a domesticated food source is actually taking off. More →

Super-local food? Mealworms are really easy to breed, so we look at how to grow your own supply at home. From the DIY hive to the high-tech gadgets, here's how you could raise your own protein supply. More →