Up to 500g of protein-rich ‘superfood’ could be yours each week, and all you put in is food scraps. It sounds too good to be true; perhaps the catch for most people will be that the superfood wriggles. It’s mealworm, aka beetle larvae. Usually spotted in fish-bait tubs or pet food aisles.

But the creators of the LIVIN farm don’t see this as a catch at all.

Emphasising the nutritional and environmental benefits of eating these insects, Katharina Unger and her team describe their project as “a mission to make edible insects available as an independent, healthy and sustainable food for everyone.”

Mini-farm in your kitchen

About to complete their fundraising on Kickstarter, where they’ve far exceeded their $100,000 goal, LIVIN Farms has so far been a success. In November 2016 the team will begin sending out the first new ‘desktop hives’ to hundreds of backers around the world. 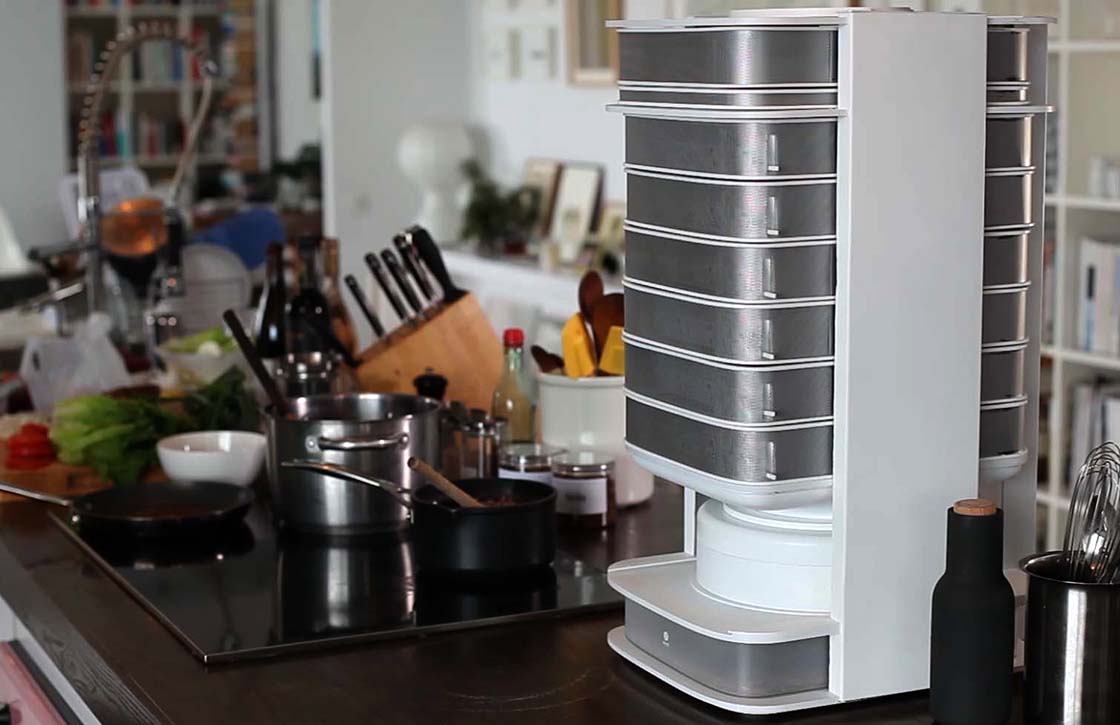 A high-tech piece of kit, the hive is comprised of stacked levels through which the worms move, with humidity and smell removed by filters. The mealworms – which are actually larvae of the Darkling beetle – are fed on food scraps such as potato, and when they begin to pupate they are automatically separated and replaced at the top of the stack, starting the lifecycle all over again.

Mealworms are known for being easy to breed. They are able to create moisture from carbohydrates, and require relatively little attention. It is entirely possible to grow your own ‘harvest’ in a box in the shed, and indeed bird protection agencies encourage people to do so, as the larvae make excellent feed for struggling garden birds over the winter.

A DIY mealworm farm requires fairly cheap materials – some plastic containers or buckets, sacking and egg cartons, some cardboard – and a warm (25-30deg) space to keep them. For full instructions, see the British Ornithological Organisation who are enthusiastic proponents of growing-at-home.

Growing the larvae at home takes a bit of patience and attention, as they must have moisture from fruit or vegetable slices but not so much that mould grows – and getting from starter group to continual harvest will take several months. But eventually you should have a plentiful supply of protein, whether that’s for you or for your garden birds and fishing trips.

One of many YouTube series on building DIY mealworm farms.

But constructing a worm home out of bits of sack and cardboard might not appeal to the less ‘hands-on’ types; the LIVIN hive makes the process simple. There’s even an intriguing ‘harvest’ button you press once a week. It’s all very advanced – and therefore doesn’t come cheap. Early bird purchases of the kits started at $449 on the kickstarter programme, but are expected to retail at around $700 when they hit the market later this year.

Katharina Unger thinks it is the unique combination of “biology, design and technology” that makes the hive project stand out. Along with co-founder Julia Kaisinger, Unger has spent the last two years working on prototypes and building a community of backers and contributors, through conference-hopping and TED talks. They take part in educational programmes too, and are producing an app with recipes and tips for cooking the larvae.

The accessibility of the mealworm hive is surely part of what makes it so appealing - but currently only accessible to those with several hundred dollars to spare. It’s a beginning though, and could set an interesting precedent, as well as drawing in taking a curious interest in entomophagy. Rather than ordering freeze-dried bugs or taking your chances foraging in the garden, the hive creates food in a tray, food that never leaves your kitchen, food that contains only what you have put into it. Locally-sourced food is increasingly popular as it lacks the air miles and packaging associated with supermarket produce - and it can’t get much more local than your own kitchen.

Whether or not you might get tired of mealworms for dinner remains to be seen - there are certainly plenty of ways to cook them, and you’d never have to buy roasted peanuts again with the healthier mealworm alternative.

But the overall aim of LIVIN Farms seems to be to normalise the whole process. ‘Wriggly’ need not mean ‘disgusting’, and perhaps if they’re sitting on your kitchen counter week after week, it would become an everyday thing to pop a frozen batch into your burger or banana bread. Of course, that’s equally true if its a DIY farm - they just might be a bit more pungent.

Time will tell - the experiences of LIVIN’s first customers in November 2016 will be interesting to follow! It is undoubtedly early days in the ‘food revolution’ Unger and Kaisinger describe on their site, but their hive project seems to be at the forefront of it. Perhaps greater affordability will come as this ‘revolution’ progresses. Perhaps some form of insect hive will one day be just another ‘mod con’ in kitchens. Either way, it’s definitely one to watch.

More on United States Grow Your Own

‘As difficult as herding cats’, the saying goes – well, try herding grasshoppers. Not only can these guys jump the bug-equivalent of several football fields, but they can actually fly too. Nevertheless, the idea of farming them like a domesticated food source is actually taking off. More →