Tasked with researching edible insects, I finally got to make some!

The mealworm is touted as one of the great revolutionising bugs of the entomophagy fad, as they’re easy to grow (even at home) and have good nutritional value. The trouble with the mealworm from a culinary point view is that it doesn’t really taste all that great. It doesn’t taste bad either. Glass half full: it tastes mild, and slightly nutty. Glass half empty: it’s just a bit bland.

But don’t despair! The blandness of the mealworm makes it a good gateway bug for those of timid character. I didn’t feel it tasted distinctly ‘insect-y’. Its texture is similar to that of Rice Crispies. Combined with the mealworm’s somewhat bland taste, the texture makes it a great sponge that soaks up the flavour of spices or sauces. 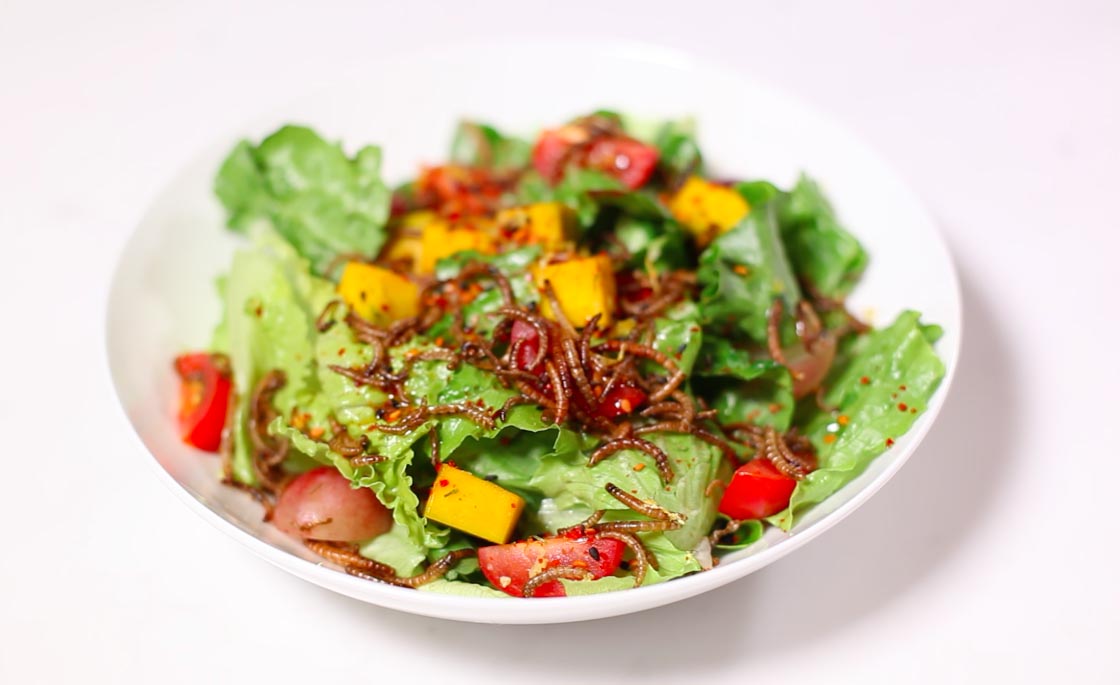 I have to admit that the mealworms I bought were frozen and dehydrated, which could explain the texture I experienced. To be fair, a recently deceased mealworm might be chewier and more fatty! Also, they had been farmed industrially – this could be a reason for the blandness, as insects are said to taste like their feed.

To be fair, a recently deceased mealworm might be chewier and more fatty than these dehydrated ones

Now to the point of this post – what did I cook with them? I only had one batch of mealworms, so I haven’t been all around the board with experiments but I tried a few things.

After chowing down a few unseasoned mealworms straight from the bag I got them in, my first instinct was that they’d work as an interesting substitute for bacon as a sprinkle in potato-leek soup. The slightly nutty flavour, I thought, would give a more rounded taste to the soup compared to that of the extra salty savouriness of the bacon. Due to the texture of the mealworms though, what I ended up with was close to cereal sitting in milk for too long, making the Rice Crispies sensation all the more obvious. The nutty flavour of the mealworm was also watered down in soup.

From using the mealworms as croutons in soup, I moved to croutons in salad. To much greater success I used the remaining worms (which are technically beetle larvae) in different salads.

I tried using them in a kale salad (other ingredients were spring onion, green beans and red apples) – but this time I didn’t go for the unadulterated mealworm flavour. Instead I fried them in a pan with garlic and soy sauce. On this occasion, the spongy texture was rather useful: the mealworm sucked the flavour right up, becoming an interesting alternative to soy-roasted almonds – and did wonders for my salad.

I used them au natural in a bulgur salad as well, for the nutty, umami nuance. I added some bacon as the salty part of that dish, making pig and worm come together in great unison.

In another post here on BUGSfeed we describe how you can prepare and dry-roast your mealworms if you have a fresh batch rather than a frozen one.

Grasshopper tacos are making their way into the trendier eating spots of the US, as is the way with any ‘unusual’ food - sushi was once the same! More →

As all Scottish followers will know, tonight is Burns Nicht. Yesterday, we were wondering on Twitter if someone had made haggis, the Scottish national dish, from insects yet. Today, we came across the answer and are sharing it with kind permission of the wonderful Bugs for Life project. Here's Craig MacFarlane and the bug haggis – or 'buggis'. More →