Fuelled by a fellowship to study entomophagy across the world, Nora Mishanec arrived in Japan just in time for the wasp festival, the hornet harvest, and last but not least, the following meal – wasps and hornets incorporated into a multi-course kaiseki feast – Japanese haute cuisine.

Chikara is a traditional kaiseki restaurant north of Ena, Japan. Head chef Ozeki prepared a special menu using wasps and giant hornets, but remaining faithful to traditional kaiseki aesthetics and techniques. While skeptical at first – he had never before cooked with hornets – he was a convert in the end, praising their versatility and flavour. The meal catered to a small but passionate group of hornet devotees, including Josh and Roberto of the Nordic Food Lab who were in town to learn more about Gifu’s edible insect culture.

Charlotte Payne and I had previously met with Ozeki to test out a few of the dishes, but I was still unprepared for his zealous perfectionism. Not only had Ozeki added new courses, but his attention to every aspect of presentation made for a truly memorable evening.

Upon arrival, after the warm welcome of a hornet-infused shokuzenshu (aperitif), we were greeted with the sakizuke, a tantalisingly colourful collection of appetiser-like confections. As we waited for the rest of our party to arrive, I jiggled the dish and wondered what a wasp encased inside agar-agar (kanten) jelly would taste like. Luckily, the others arrived soon after and the meal began. My chopsticks dove first for the yellow mound of jelly. I was delighted as the sweet gelatinous substance slowly disintegrated in my mouth, leaving behind a single gooey wasp.

Despite my best efforts to go slow and savour each bite, the rest of the wasp appetisers were calling out to me. I quickly gobbled up the piece of sushi topped with gingery sweet wasps, followed by the suzumebachi-iri dashimaki tamago, a rolled Japanese omelette flavoured with fish stock and filled with wasps cooked in soy. Last I tried the small square of gomadofu (tofu made with sesame seeds and, in this case, wasp larvae) with wasabi and, my favourite of all five, the delicate kiku (chrysanthemum) flower salad with marinated wasp larvae.

As I soon learned, kaiseki meals are rather quickly paced. If you sit in raptures over what you’ve just tasted, you’ll soon wind up with a backlog of dishes to eat!

The waitress appeared with a tray of little pots and placed one in front of each of us. As we removed the lids in unison the room filled with a distinctly earthy smell.

I was solidly pro-citrus and pro-hornet, though admittedly I have never tasted a traditional dobin-mushi

Dobin-mushi is a traditional autumn broth made to showcase seasonal flavours, especially the famed matsutake wild mushroom. The broth's contents are steamed and served piping hot with a piece of citrus. Ozeki's version included roasted hornet larvae and adults in addition to the usual elements.

The dish quickly spawned two table-wide debates: Did the citrus enhance or hide the flavour of the broth? And, more importantly, did the aroma of the roasted hornets overpower that of the matsutake? I was solidly pro-citrus and pro-hornet, though admittedly I have never tasted a traditional dobin-mushi for comparison.

Setting aside the question of flavour, I really enjoyed the multi-step process of eating dobin-mushi: breathing in the fragrant steam, slowly sipping the broth, and, finally, eating the mushrooms and hornets one by one. The process reveals something about kaiseki dining that is cliched but true: it is as much an experience as it is a meal.

This next dish was my favourite of the entire night: leeks, enoki mushrooms, miso and hornet larvae flame-broiled at the table atop a large dried magnolia leaf.

The effect of watching the leaf darken and shrivel as it heats up is almost as dazzling as the cheesy, creamy flavour of the hot filling. Charlotte and I had sampled it previously, and yet despite having tasted this dish twice, I’m still not sure how Ozeki manages to achieve such an incredible texture.

My only complaint: it's too potent to consume more than one or two spoonfuls

The beautiful little cup in the photo below is filled with chawan mushi, a traditional egg-based dish. The hornet version used no egg, and consisted only of a simple mixture of dashi (broth), hornet larvae ground into a paste and strained through a fine gauze, and a touch of arrow root powder for its firming qualities. 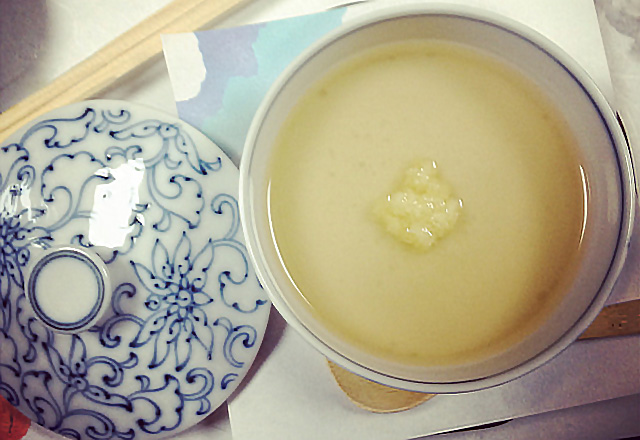 The addition of fresh ginger on top gave the chawan mushi an extra little zing and brought out the flavor of the hornet larvae. My only complaint would be that I found it a bit too potent to consume more than one or two spoonfuls.

The following dish – the sunomono – was the most piquant and polarising of the night: slices of fig, okra, persimmon, and hornet larvae in a bath of tangy gelatinous vinegar. When bitten, the bodies of the larvae gush a waxy liquid that mixed beautifully with the acidic jelly. 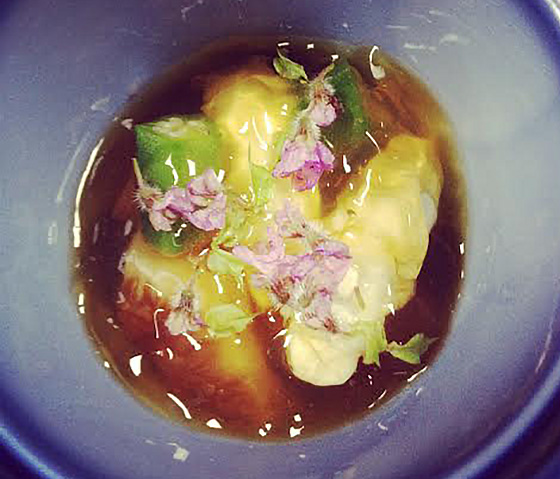 Tasting the contents of the tempura box quickly exposed everyone’s hornet preferences. Some of us preferred the velvety texture of the fried pupae, while others favoured the crunch of the adults. The larvae (left) are a bit too gooey when fried. The pupae (middle) are splendid – rich and firm. Ozeki chose not to batter the adults (right) because their hard exoskeleton lingers in the mouth far longer than the tempura batter does. Dipped in salt and covered in fresh lime juice, the tempura hornets were the perfect greasy antidote to an otherwise healthy meal. 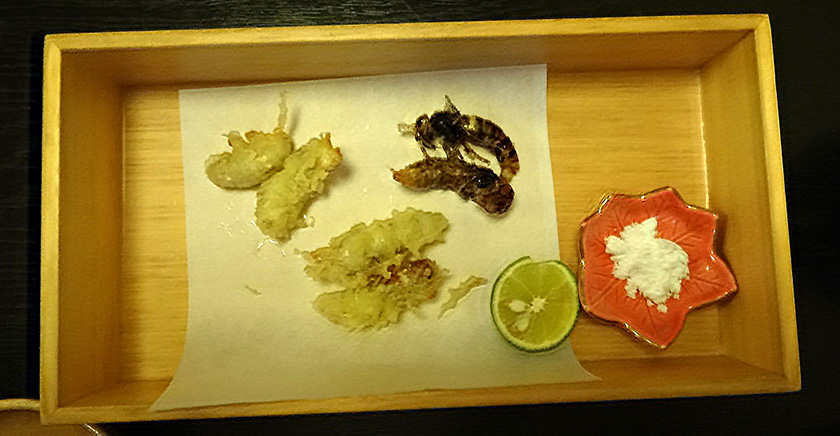 The second-to-last course was met with groans of both pleasure and pain because all of us were bursting full by the time it arrived: soba noodles! Ozeki made a special broth with hornet pupae. It was delicious and though I was overwhelmed and stuffed by this point, there’s nothing better than a little noisy slurping to finish a meal!​

Dessert came in the form of vanilla ice cream with a thick syrup of fruit and lentils. Never one to turn down sweets, I enjoyed Ozeki’s final dish but couldn't mask my slight disappointment: I had been hoping he would invent a hornet dessert! Am I wrong for thinking ice cream was a bit pedestrian after such an extravagant and insect-filled feast? Probably. After all, Ozeki had come a long way since he scoffed at the idea of cooking with insects. I'm just happy the hornets captured his imagination for the savoury, if not the sweet. 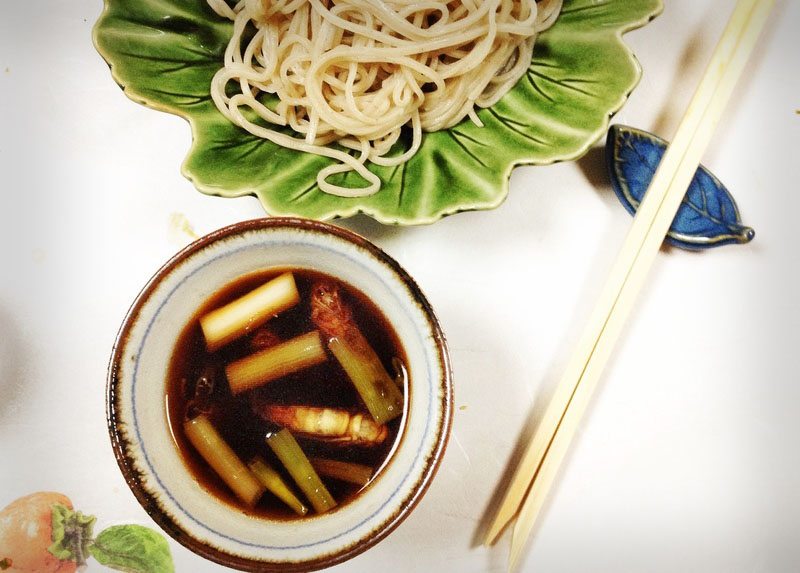 This text was originally published on Charlotte Payne's excellent blog.