We regrouped, elated at our success. "Now for the tough part." Nakagaki raised his eyebrows at me as he spoke, "ready?"

I nodded, feeling ready for anything. Our first job, it seemed, was preparation and protection. We had two suits with us, both roughly sewn from old tarpaulin by another amateur hornet hunter.

Each carried enough venom to cause, at worst, death.

Miyake handed me a white suit, while leaving Nakagaki to don a dark blue. I later discovered that this was an act of generosity – hornets are allegedly drawn to darker colours.

After pulling my hands and feet into the requisite thick rubber gloves and boots, I stepped into the stiff suit and pulled the headpiece over my face. My vision was limited to a square of wire netting covering my eyes; my hearing was almost entirely obscured by the tarpaulin. 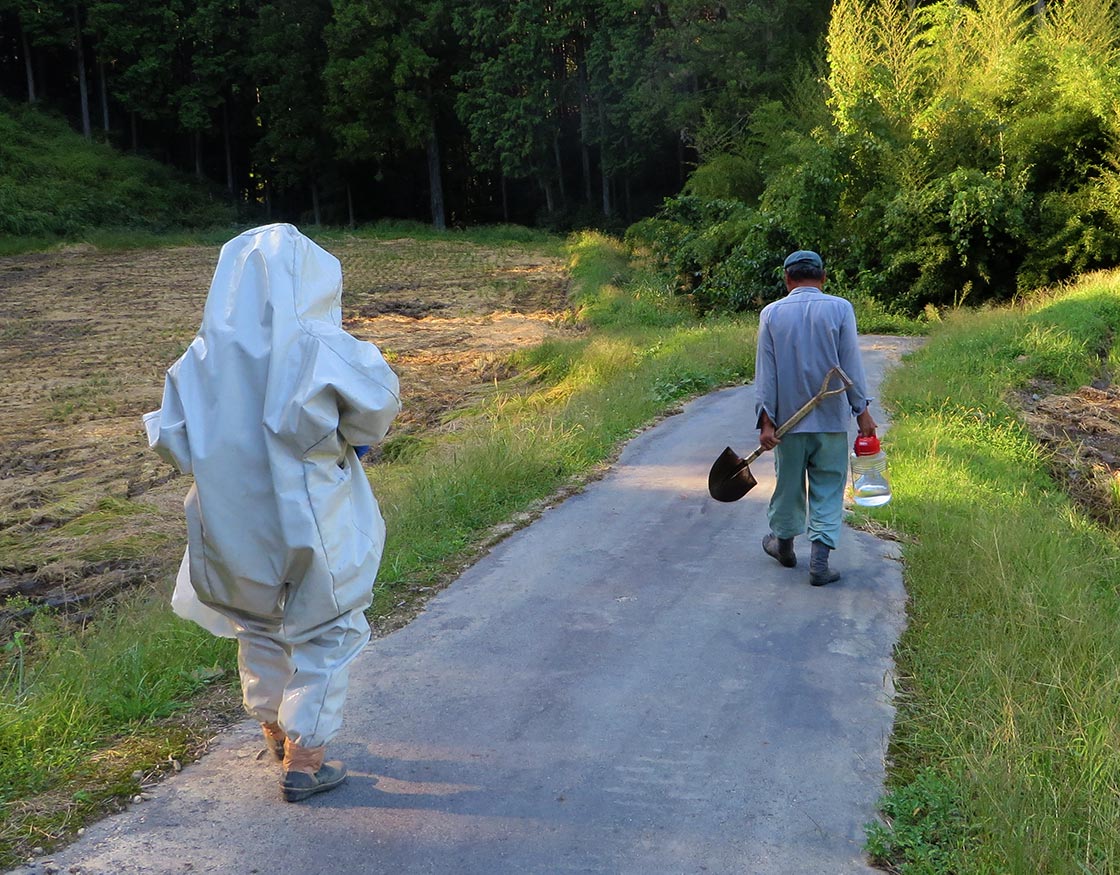 As I tried to recalibrate my impaired senses, Nakagaki grabbed a roll of strong duct-tape, with which he attacked each of my wrists and ankles to avoid even the smallest chance of an opening. Surely this is a bit excessive, I thought but didn’t dare say aloud.

Don't try this yourself
Giant hornets can be very dangerous. Their stings can kill humans – see our main article here. You'll want to get your supplies from a professional hornet hunter like this one.

Miyake pulled a large carton from his bag, and handed me a wide-mouthed glass jar. He took off the lid, and emptied the contents of the carton into the jar. "Shochu!" he explained. [That's potato- or wheat-based alcohol, 35-40% vol, relatively cheap.] "And your job is to hit the adult hornets into the shochu! OK?" He grinned, implying the infinite ways in which I had misjudged this situation.

Nakagaki and I made our way towards the nest. Immediately I felt constrained – my movements were stilted and clumsy, my breath hot and wet within the confines of the suit, and I could barely sense the surrounding forest. Fortunately, Nakagaki’s white figure was easy to follow. 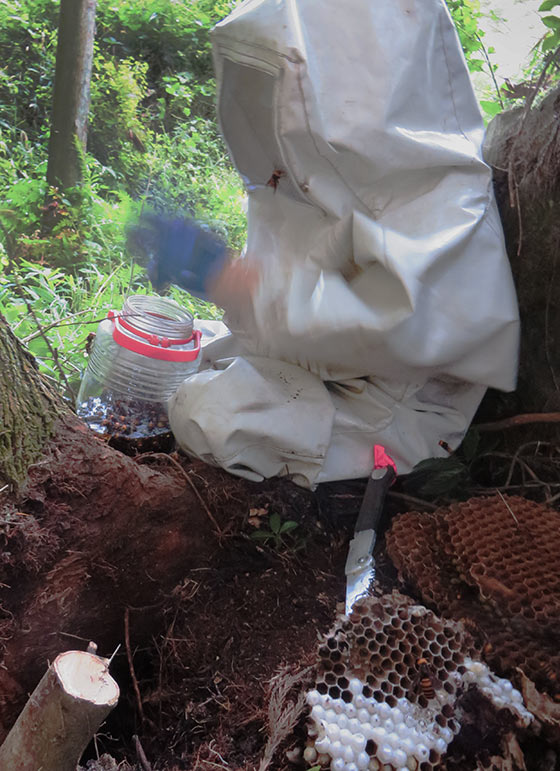 We reached the site, and a handful of hornets came to check on us. Their low buzz was loud and penetrating, but there was no way I was about to feel intimidated – after all, think of the duct tape! I was, surely, more than protected.

Then, Nakagaki took out his sickle and began to scrape away at the ground surrounding the entrance to the nest. As he did so, the hornets reacted.

I was hooked on hornets.

Suddenly, the inquisitive swarm of half a dozen hornets became an enraged and fearsome defence force. We were under attack. My layer of tarpaulin felt as delicate as rice-paper, pummelled from every direction by hundreds of miniature fighter jets carrying lethal weapons. Each carried enough venom to cause, at best, considerable pain and a large swelling. At worst, unconsciousness and death.

For what seemed like an eternity, I sat paralysed. I clutched my jar, uncertain how I could possibly entice these deafening forces of nature to drown themselves in its depths.

I think I also took a few stunned photos as Nakagaki’s patient digging began to uncover a magnificent hexagonal structure a few inches below the forest floor. 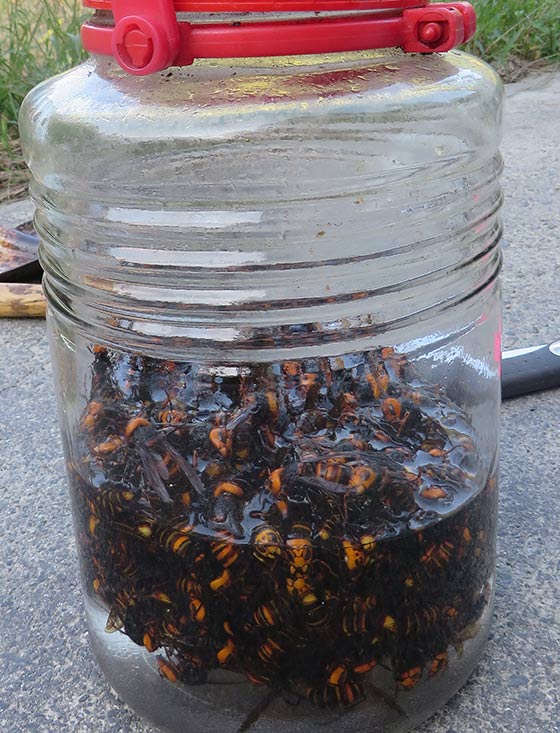 Finally, I regained a sense of purpose. My tarpaulin covering had withstood the onslaught for long enough that I trusted it, and I decided to go all out following Miyake’s instructions: "Hit them." My arms flailed wildly, attempting to direct each and every one of the hundred or so hornets circling me into the wide-open mouth of my shochu jar.

All but a few evaded my inept swipes, and after a possible eternity of this unproductive pursuit, Nakagaki looked up and took pity on me. "They are attracted to movement," he explained, "so, you just keep your hands very close to the jar, and move them ever so slightly, like this." His hands mimed the repetitive actions of a person absent-mindedly petting a dog.

Within seconds, several hornets had found their way into the alcohol. This man was an artist.

I attempted an imitation of his work. After 30 minutes of my repetitive hand actions, and his unrelenting digging – a difficult and delicate job, as I’d learn at a later date – we had our bounty: several layers of nest, each literally bursting forth with larvae and pupae, and a jar of shochu-soaked hornets.

We returned to the village victorious. Some layers of the nest were given to respected elders and ex-hornet hunters, each of whom responded with glee. But we took most of them back to Nakagaki’s house, where his wife Sayoko greeted us excitedly and proceeded to provide beers, snacks, and tweezers for us to extract each and every larvae from its hexagonal home.

As we sat around the low table, plucking at our prey, we recounted the highs and lows of the day. Sayoko showed me how to cook the hornets, and Nakagaki gave me a taste of his aged hornet liquor – at its best, he assures me, after it has steeped for two years.

I was hooked. Hooked on hornet hunting, on hornet liquor, on hornet cooking. I hoped that this would be the first of many autumn days spent getting to know these alarming, captivating and exquisite animals. 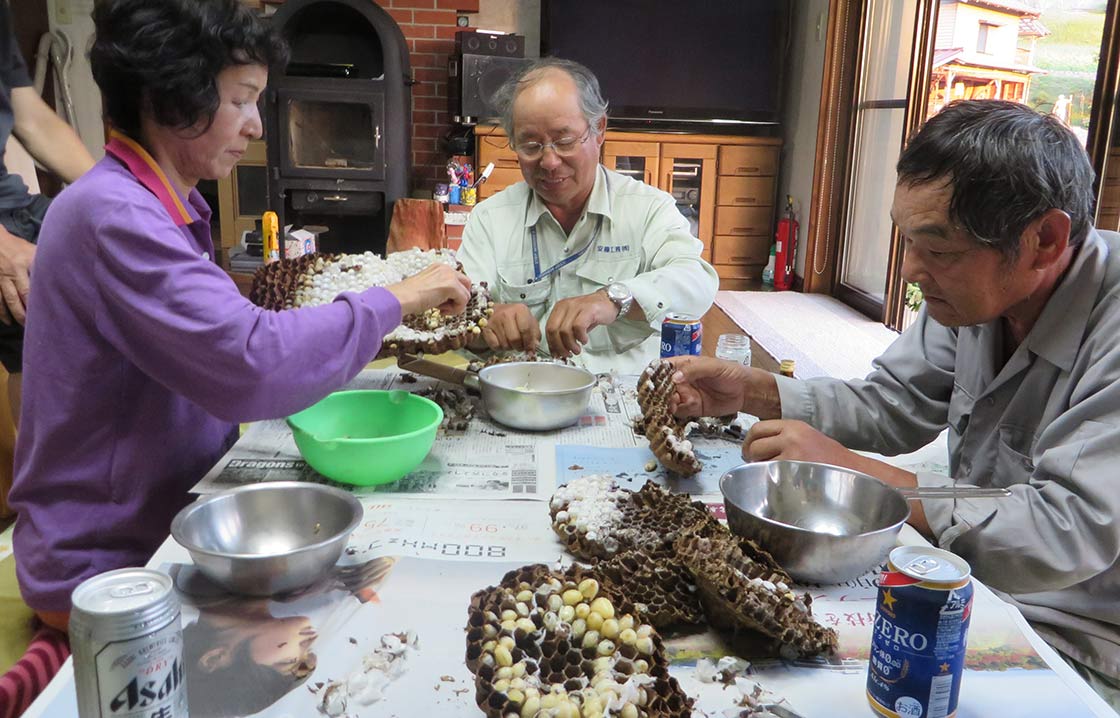