"There! That tree, over there." Miyake pointed to the foot of a low hill that rose above the paddy fields. When we reached the spot, there it was - a giant hornet, crawling across the bark. I turned to Miyake in astonishment. How could he possibly have seen the insect at such a distance? 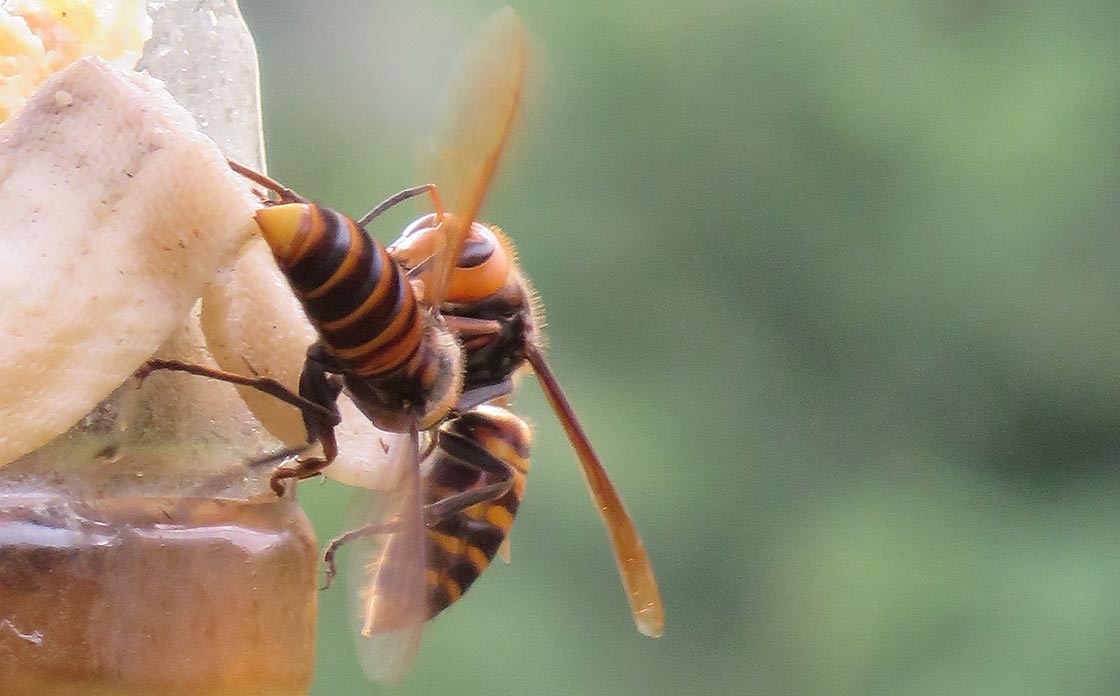 The 65-year-old with impossibly sharp eyes smiled to himself, and he and Nakagaki began to prepare their chosen ‘bait’ – a piece of cloth, soaked in sugar water and attached to a long pole.

I later learned that what had, in fact, caught Miyake’s eye across the paddy field was the tree itself. It secretes a sweet nectar, and giant hornets – which can only ingest liquids once they have reached adulthood – love to feed on it. 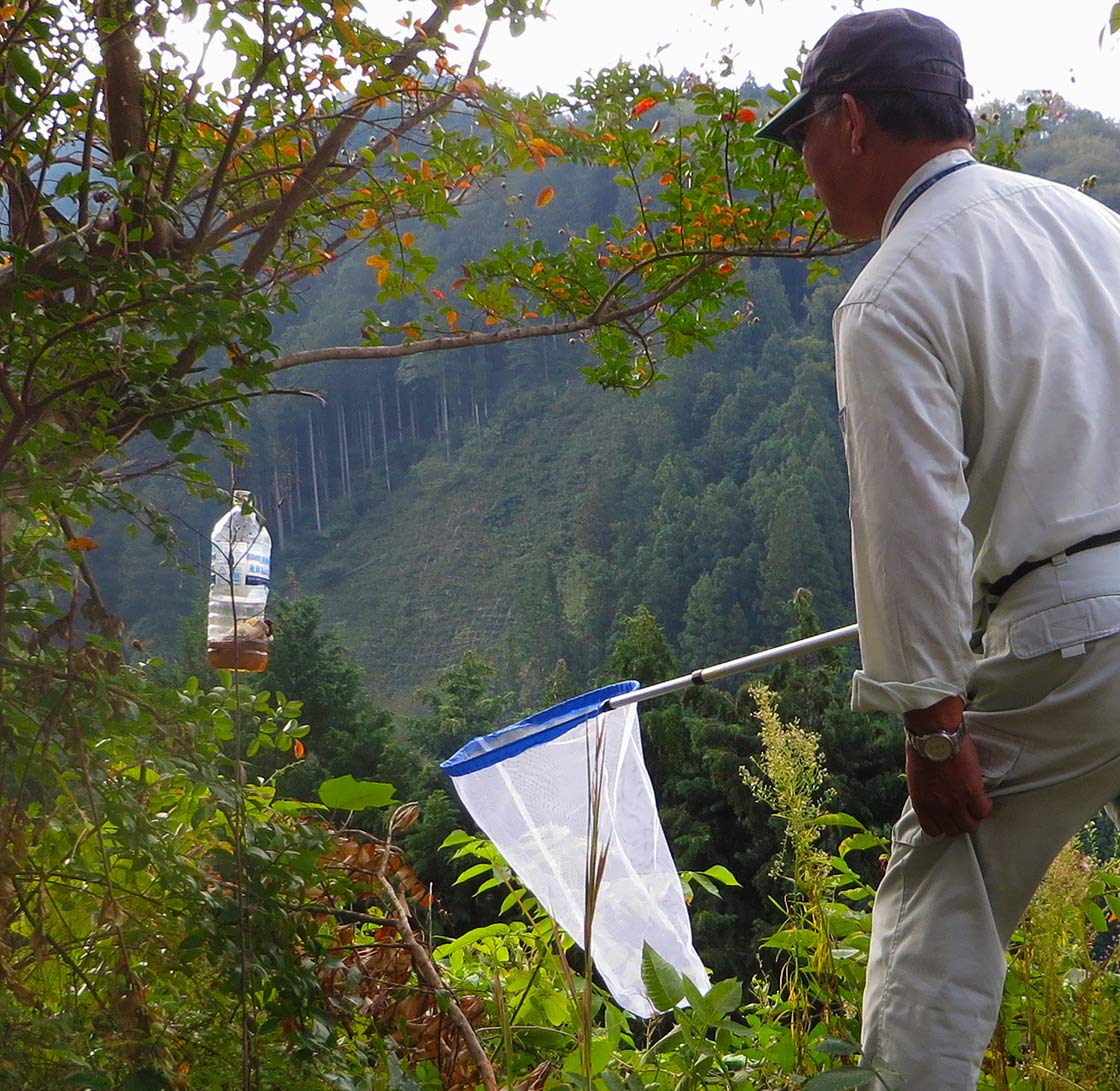 The hornet soon sensed the sugar water below. She flew down and began to drink. Nakagaki turned to me. "We do nothing, for now. Let her get accustomed to it." Suddenly, she took off at speed. "Good. Now more will come," Miyake stated with a smile, shielding his eyes from the bright autumn sun as he stared after her.

The two men, friends since childhood, were clearly pleased with the way that the morning was going so far. Their good mood continued, and when there were about three or four regular visitors to the sugary cloth, they brought out a net, a large pair of tweezers, and small strips of white plastic. "Landmarks," Nakagaki explained, as he swung the net and caught our first hornet.

Don't try this yourself
Giant hornets can be very dangerous. Their stings can kill humans – see our main article here. You'll want to get your supplies from a professional hornet hunter like this one.

As the hornet thrashed inside the net, Miyake caught and gripped her body with the tweezers. This done, Nakagaki flipped the net and began to loop one of the white plastic strips around her vibrating body. Buzzing loudly, she twisted her abdomen frantically to avoid the plastic, but to no avail. 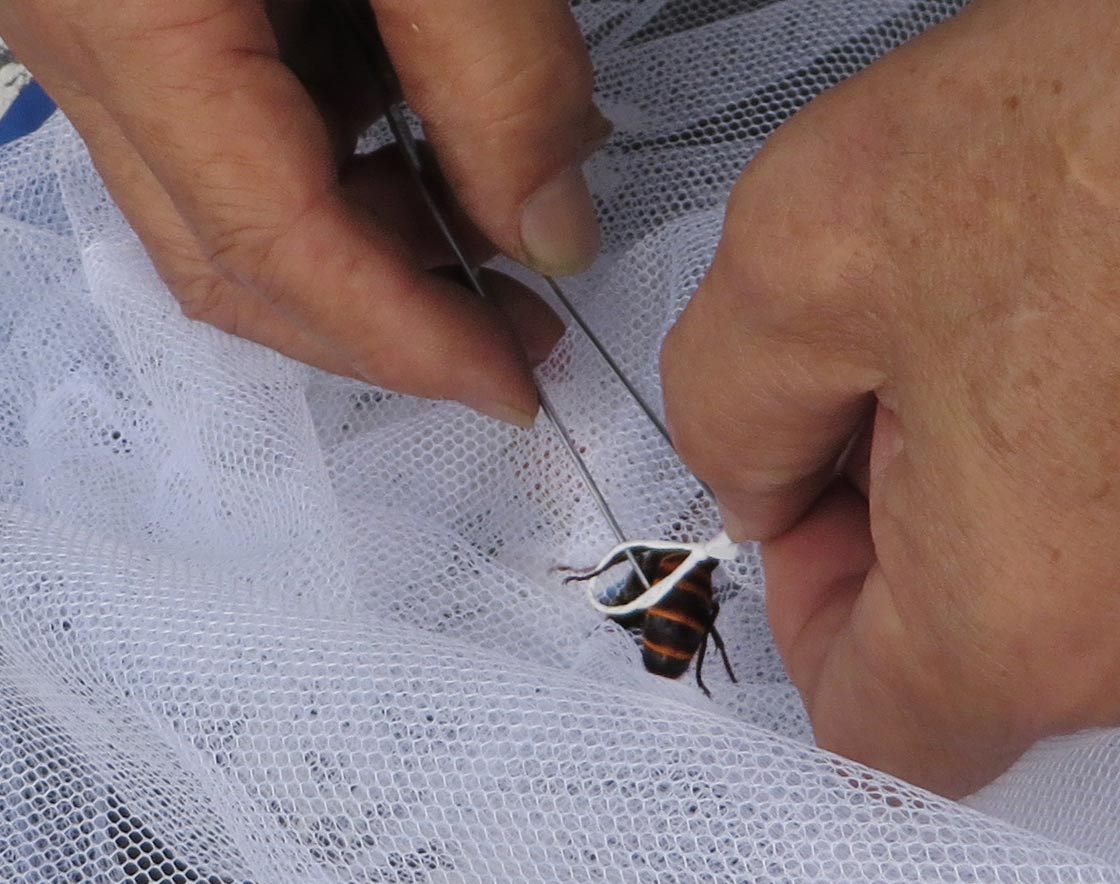 The two men stepped back in unison, and the hornet, now with two white tails trailing from her body, rose into the air. The ’landmarks’, it turned out, were these white tails – markers that made the hornet clearly visible against the dark green of the landscape, even at a distance.

They repeated this brilliant double act – trap, tie, release – with several hornets. Then, it was time to chase. Walkie-talkie in hand, I ran in the direction of the hornets as they sped towards their nest. I began to learn the art of watching the horizon, waiting for a white dot to appear, taking note of its line of flight, and following at intervals. Hornets rarely waver between their food and their nest, and their speed of travel – up to 45km/h – means that they are a challenge to follow.

On this particular day, we very nearly gave up. We followed the hornets for over a kilometre from the original tree, finally reaching a thicker patch of forest, where the dense trees further obscured our vision. By now it was approaching late afternoon, and, as Miyake pointed out, our hours of sunlight were limited and we would not be able to dig up the nest in the dark.

We resolved to give ourselves just twenty minutes before packing up and heading home.

Would you spot a hornet without 'landmark'? Photo: Charlotte Payne

Suddenly, Nakagaki’s eyes lit up. He disappeared for a moment, and came back with a pair of small ladders and chains. He cast the chains on the nearest tree, and began to climb, steadily, with a fluidity of movement that belonged to a man half his age.

Later, as we were sitting around a low slung table recounting the events of the day, he told me that the feeling of being able to watch a hornet soar above the treeline and then suddenly swoop downwards was one of the greatest feelings he knew.

But at the time, I was on the ground, lost in the forest below, certainly not expecting that soon I too would have a similar experience. "The pine!" Nakagaki yelled, "to the east!" I scrambled eastwards. "Here?" – "Not that one! One further!" Suddenly, before me, I saw a flash of white. With a low buzz, a ‘landmarked’ hornet disappeared into the ground at the foot of an old tree stump.

"Got it!" I screamed excitedly, caught up in the moment. I watched as a second hornet followed the first, confirming the location of the nest.

"Brilliant," said Miyake, coming up behind me. "And there are a lot of them – it’ll be a big one."

Will Charlotte manage to catch the jets and avoid their deadly weapons? Here is part 2.