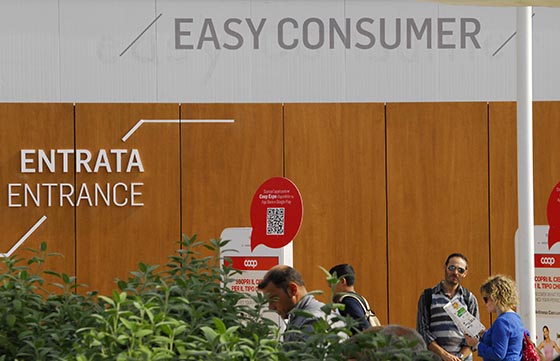 Continued from part one, in which I found edible insects in the Future Food District and the Supermarket of the Future but was unable to break the glass that securely locked them away.

I kept roaming the vast Expo area in Milan – all those impressive national pavilions showing how the respective countries were “feeding the planet”, as the Universal Exhibition’s theme suggested. Yet all the nations that, as we’re learning here on BUGSfeed, regularly eat insects (say, Mexico, Uganda or Japan) – they had somehow decided to hide to the world the fact that they do.

So far, in more than 100 hectares of exhibition space, I had found two humble displays of 'the insect'. Luckily, I had also heard that Belgium was a step ahead. The country is trying to position itself as the new home for the edible bug – and it seemed there had been actual tastings at their pavilion. Was it some kind of diplomatic privilege, perhaps? 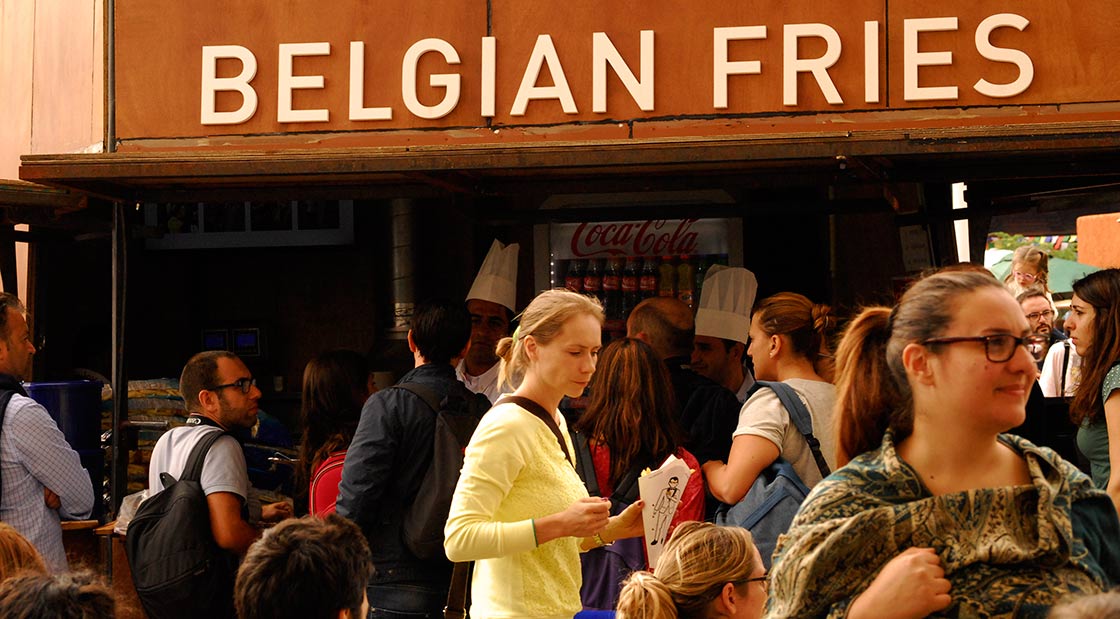 With time running out on my humble stopover at the vast Expo, I headed straight to 'Belgium'. What did I find? Outside, Belgian fries and beer. Inside, a taste of chocolate. Where was the taste of insects? "To find out more about the future of our food, you can go to the cellar of the building to sate your curiosity and quench your thirst for knowledge." 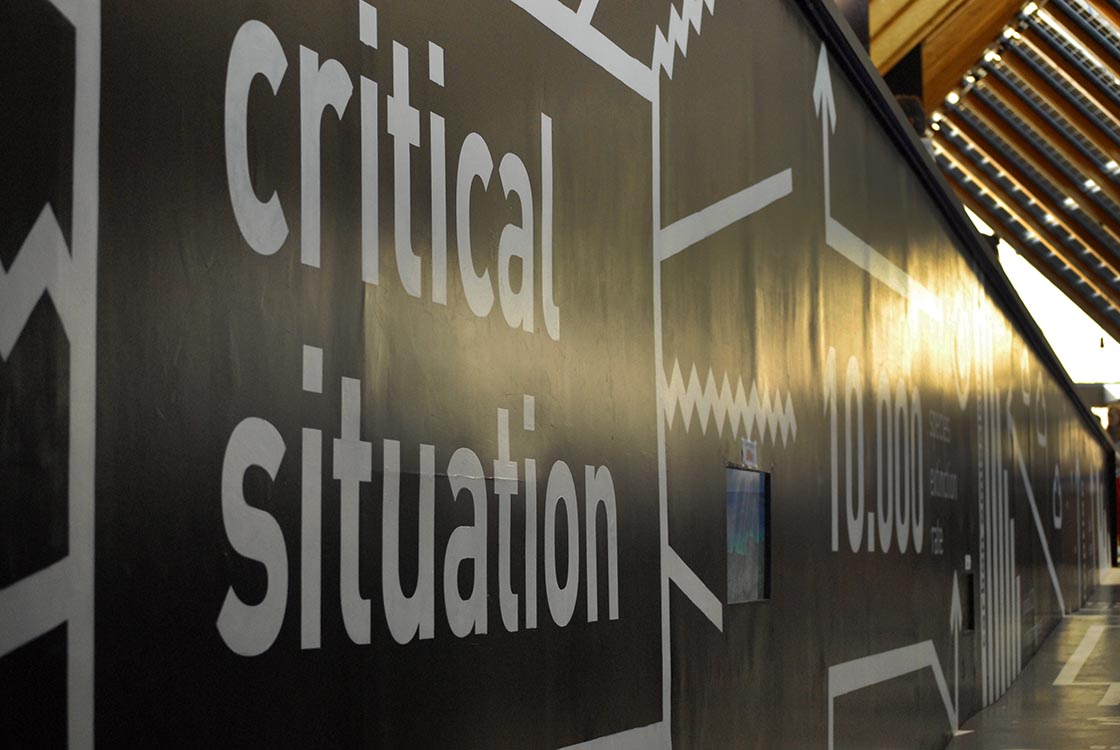 So I made my way into a channel leading underground – and the world became even darker than in the supermarket.

Walking in, I faced some intriguing displays of aquaponics.

Was this were the insects were to be found? No. I looked around. And there, behind my back, they were – as oversized vertical video displays, showing various creatures hopping and creeping about. Nice animations, surrounded by lots of facts in the dark. 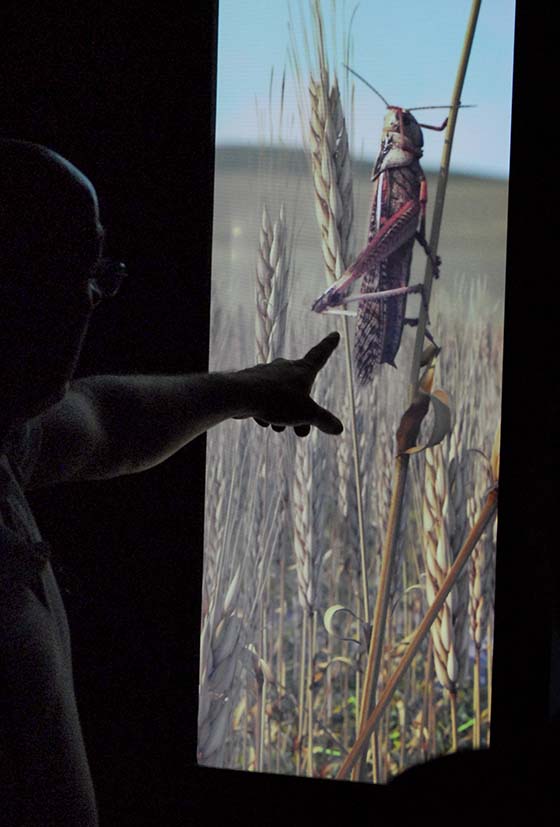 Was there a live insect to be seen? No. Or a dead one to be tasted? No.

Where did it say “great taste”? Would that not be the main argument to convince the masses? 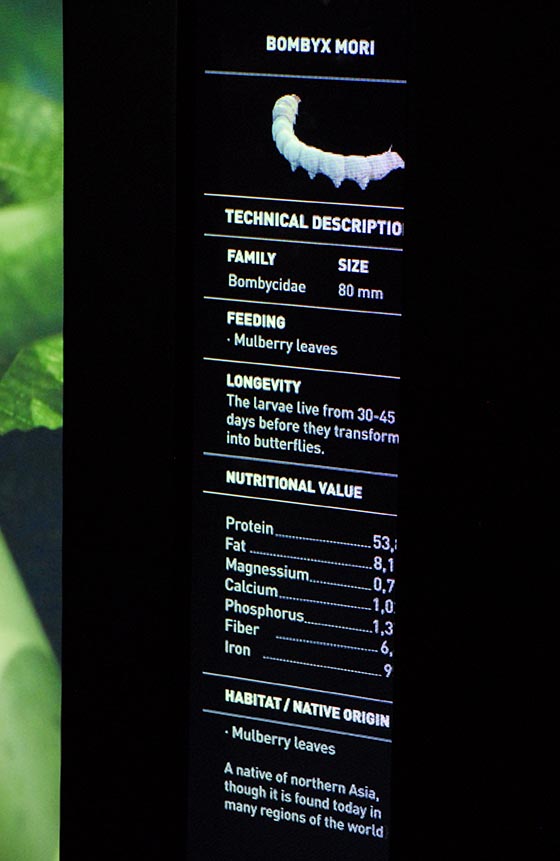 Frustrated, I headed outside, where I decided to give the Belgian fries a miss (not quite the future of food, is it?). I passed a stall that was giving away apples. I had one. It was my best meal ever. (Or so I thought at this exhausted point, until I faced a truly oversized bistecca alla grissinopoli in Turin the night after. Again, I digress…)

So there I was, watching the sun set on my train to Turin, trying to figure out why my mission to get a taste of insects had failed. In the end, it wasn’t my limited time or the Expo’s limited scope. It turned out Italian regulations didn’t allow for edible bugs to be served to the public.

A month after my Expo visit, on 27 October, the first authorised Italian insect tasting took place (Italian video below) – for accredited journalists only, and just three days before the exhibition closed its doors forever.

Meanwhile, market researchers at Doxa say over 40% of Italians would be willing to eat insects.

My search for insects that would feed the world (1)

A couple of months ago, I found myself passing through Milan. It was the time of the Expo – the Universal Exhibition under the theme 'Feeding the Planet'. Surely, edible insects would have to play a big role in the future of food? I went on a mission to finally try some edible insects! Here’s how it went. More →

At Cinemambiente in Turin, one of the longest-running environmental film festivals, BUGS by Andreas Johnsen received an award in the international documentary competition. The 'Food Smart Cities' award is presented by the Development Education and Awareness Raising (DEAR) programme of the European commission. More →