Our increasingly urban world demands clever innovation and utopian ideas if we are to have a liveable, sustainable future. The idea of ‘resilient cities’ has taken hold in recent years, and at the heart of this is food and energy sovereignty. It’s linked to the emphasis on community control and localised production, because reliance on distant food chains and their over-packaged products does not foster resilient communities, or indeed healthy ones.

So people are devising new ways to produce and source food. A noticeable trend has been the rise in urban beekeeping. Bans were lifted in the UK and some US states, and hives now adorn the rooftops of thousands of buildings in towns and cities. There’s even bees on top of the Tate Modern gallery! 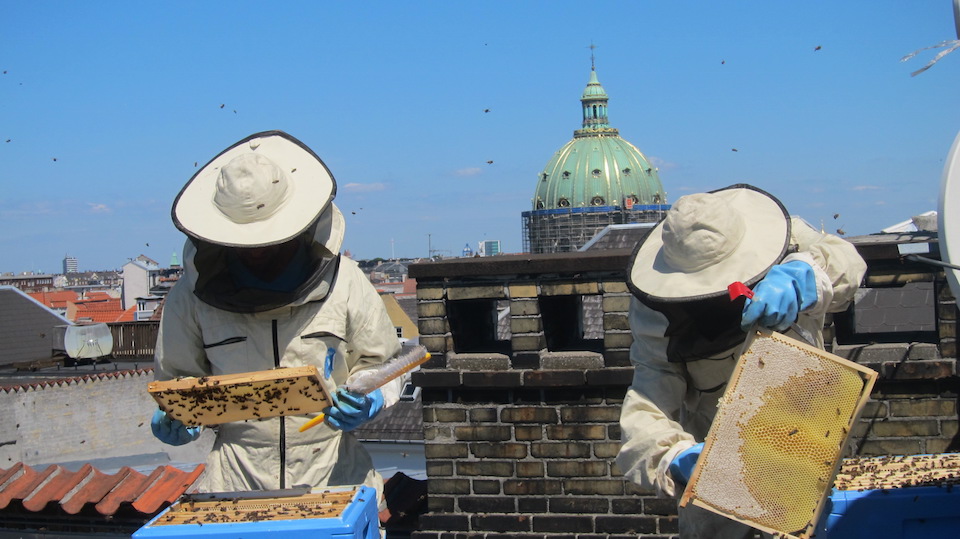 Honey is something you make together" – Bybi director Oliver Maxwell

Younger, city-dwelling people are turning to beekeeping as a way to connect with nature, and do something good for the environment. The idea that you’re creating a home for an extra 50,000 ‘pollinators’ is appealing when we’re faced with news of bee decline and the accompanying environmental ruin. Environmentalists promote urban beekeeping as a strategy to halt bee decline and counter the factory-farm nature of much of our honey production.

Beekeeping isn’t just an individual pursuit though. Social enterprises like Bybi in Copenhagen are showing how this form of local food production can be successful – not just in commercial terms, but socially too.

At the core of this model is a recognition of cooperation and interdependency in urban models of food production. Urban beekeeping, says director Oliver Maxwell, is “not something you can do yourself. You need to involve the organisations, the citizens, the schools – the whole process. That’s why we say that honey is something you make together.”

Maxwell first had the idea for Bybi in 2009 while attending a climate conference in Copenhagen. With a background in anthropology, his interest is in the role of partnerships in production. Cycling past some bee hives on the edge of the city, he was intrigued and tracked down the beekeeper. Five years later, Bybi has around 200 colonies spread across 25 urban sites.

The name means simply ‘City Bee’, and the model is a fairly simple one. Organisations, from businesses to housing associations, can host hives on their rooftops or in gardens for rental; in return they get a programme of events or skills training. Business seeking to show their involvement and commitment to local communities have been keen partners in the project; Bybi also work with schools and run tours and workshops, giving people an insight into the fascinating world of bees. 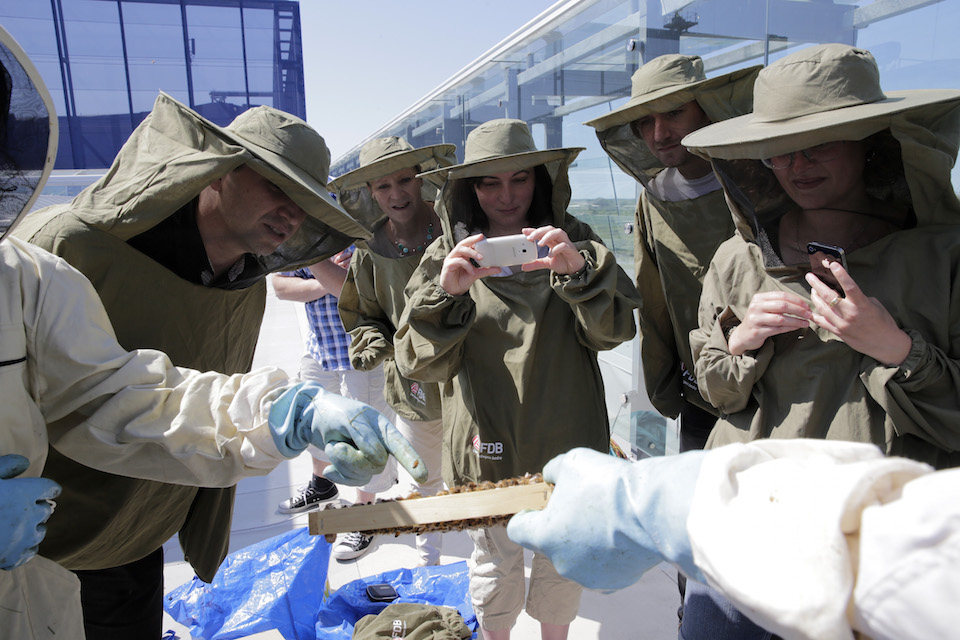 Training and work opportunities for the long-term unemployed, homeless and refugees have been central to the project. The current team includes a beekeeper from Syria, learning Danish while he helps with the hives, and a Sudanese refugee. A professional beekeeper heads up the team, looking after the 200 colonies that dot car parks and roofs across the city.

Though Bybi’s honey is not organic, this is due merely to the stringent definitions that require the pollen to be 5km from a settlement - virtually impossible to find in Denmark. Honey is actually very pure, because the bees themselves strictly control its production, rejecting any polluted pollen before it enters the hive. Each site, explains Maxwell, has its own distinct flavour. It’s highly affected by seasons, with flavours morphing every few weeks depending on climate and weather - honey production is not something you can really control. “It’s a wild process”, he says, which speaks of the incredible diversity in nature and human life. Bybi’s “concentrated sunshine”, as he calls the honey, is proof of the city’s diversity and capacity which we’re only now becoming aware of.

Food from the brood

The company is innovative in other ways, selling by-products of beekeeping that would otherwise be discarded. In a corner of the Bybi website you can find the ‘experimentarium’; an illustrated guide to the more unusual products. Pollen is edible; bees preserve it using nectar and digestive fluids, packed into empty honeycomb cells. It’s basically fermented, so people sometimes refer to it as ‘bee bread’. It’s a pretty ingenious feat on the part of the bees, but this bee bread is also edible. Predictably, it’s been dubbed the latest ‘superfood’ for its high vitamin and protein content – to see an example of its use in cooking, check our recipe page.

An even lesser-known product of beekeeping, and one which Bybi are unusual in selling, is bee larvae. The drone larvae are regularly discarded and these bees don’t have a pollinating role, so it’s arguably an ethical, as well as nutritious, food source. Currently Bybi supply the world-famous Noma restaurant with larvae, and as the interest in edible insects continues to grow, more beekeepers may follow suit. 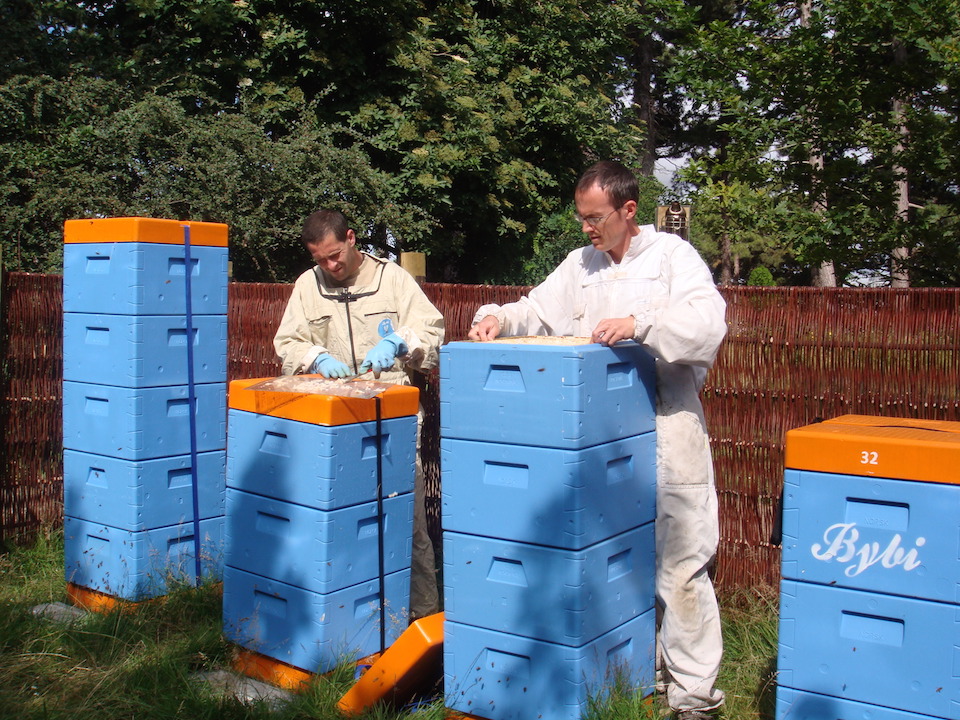 The argument for expanding this model of social enterprise urban beekeeping is strengthened by the professional knowledge it brings in. One problem with the rise in ‘DIY’ urban beekeeping is that amateur apiarists lack the experience necessary, leading to swarms and other problems. Diseases and genetic problems can occur in colonies without a degree of expertise, and this is a particular problem for urban bees, as Oliver Maxwell explains. “If you don’t change your queens regularly, you get very aggressive bees. Not a good idea in the city.” Combined with the phenomenon of swarming which occurs when colonies are left unattended, this has led to some concerns – and a rash of newspaper headlines – over the dangers which accompany urban beekeeping. But a model like Bybi’s goes a long way to ensure these pitfalls are avoided, due to the use of professional beekeepers to oversee the hives. Additionally their commitment to training new workers not only provides opportunities to those facing social disadvantages, but also means more skilled beekeepers on the scene.

Similar projects have had success in the UK, with Hope Street Honey in Liverpool as well as two nearby cathedrals providing Liverpool with its own ‘ultra-local’ honey source. The benefits of these projects are diverse - not just employment and training opportunities, but the reclamation of derelict land and buildings. 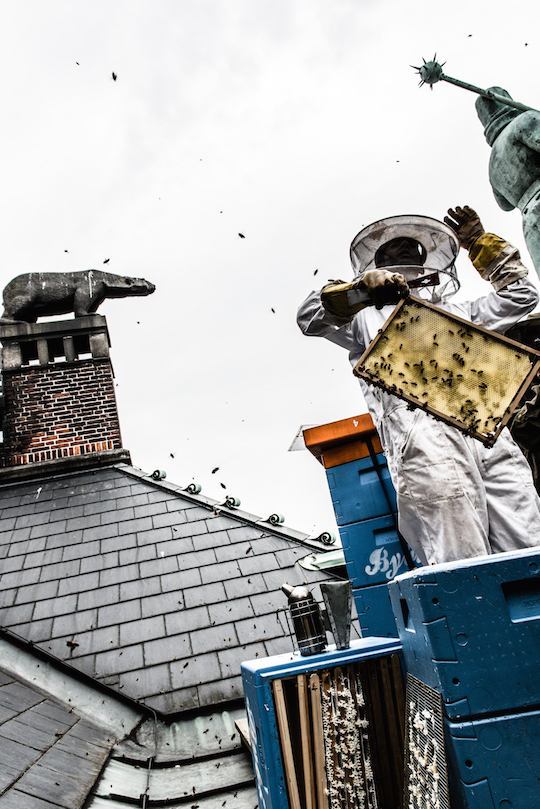 Bybi demonstrates that food production can be deeply integrated into the fabric of the city, and provide a social good as well as nutrition. This is in a sense a deeply utopian project which is nevertheless grounded in reality; Bybi operates as a successful business and embraces the private sector – though Maxwell adds that they would not work with some companies. With the emphasis on diversity and interdependence between groups and processes in the city, his vision for Bybi is reminiscent of Chris Carlsson’s Nowtopia, albeit with a commercial edge.

Maxwell describes his goal as proving that he can create an industry that “enriches, rather than destroys […] where every step in the production chain has an effect that is more than its superficial function. I want to show that we can do something that is really local, really embedded.” It’s a model that goes far beyond beekeeping, and Bybi shows how we might think more imaginatively about how we produce our food, how we shape our cities, and what the future of the two could look like.

Based on a BUGSfeed interview by Jonas Bruun.

Bee larvae are eaten throughout the world, particularly in southeast Asia but also across the African continent. More →